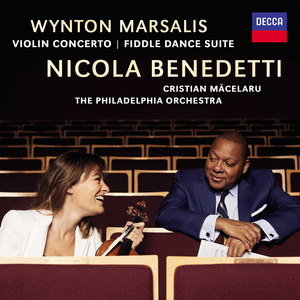 Benedetti performs Violin Concerto in D with The Philadelphia Orchestra under the baton of Cristian Măcelaru who has collaborated with the violinist to perform the work six times. The concerto was co-commissioned by the London Symphony Orchestra (LSO), Ravinia, LA Philharmonic, National Symphony Orchestra Washington, Gewandhausorchester Leipzig and Netherlands Radio Philharmonic. Benedetti performed the world premiere with the LSO under conductor James Gaffigan in London in November 2015.

Marsalis' Violin Concerto in D is in four movements and draws on the entire sweep of Western violin pieces from the Baroque era to the 21st Century. It explores Benedetti's and Marsalis' common musical heritage in Celtic, Anglo and Afro-American folk music and dance. The work revels in the magic of virtuosity and takes inspiration from Nicola's life as a travelling performer and educator. Each of the four movements reveals a different aspect of Nicola's dream which becomes a reality through the long-form storytelling of the performance.

"Rhapsody, is a complex dream that becomes a nightmare, progresses into peacefulness and dissolves into ancestral memory.

Blues, is the progression of flirtation, courtship, intimacy, sermonizing, final loss and abject loneliness that is out there to claim us all.

Hootenanny, is a raucous, stomping and whimsical barnyard throw-down. She excites us with all types of virtuosic chicanery and gets us intoxicated with revelry and then…goes on down the Good King's highway to other places yet to be seen or even foretold."

Wynton Marsalis commented, "Nicky said she wanted a piece that would allow her to inhabit an expansive range of human emotions. Though I have long loved the violin, she schooled me in its august history, in its tremendous expressive capabilities, and in a compendium of old and new techniques. From a very young age, Nicky's dream was to move people with the magic of virtuosity and the warmth of her sound. The concerto begins with her telling us the story of her dream, the playing of it IS the realization of that dream, and it ends with her going down the road to play for the next gathering."

Fiddle Dance Suite for solo violin is in five movements and Marsalis describes each one as follows:

"Sidestep Reel: In the 19th and into the 20th century, repetitive, even metered reels and hornpipes were the centrepiece of many a dance. Easy and fun, their infectious, sing-songy melodies stayed in the mind and on the tongue. The melodies of this reel, however, are a homegrown concoction of commonality between traditional fiddle tunes, the Baroque, ragtime, bebop, the quartal melodies of modern jazz and the fancy variations on themes as popularized in the 19th century.

As the Wind Goes: is the wistful late-night song of a lullaby, a campfire song, a ballad…a spiritual. It is sung as if on the wind, yearning to experience once again that which will only ever again live as memory.

Jones' Jig: The Irish jig, the African 6/8 bell pattern, the shuffle rhythm of jazz and the drum style of Elvin Jones all play around with the relationship of three in the time space of two. The juxtaposition, negotiation and reconciliation of these opposing rhythmic perspectives create interesting musical relationships all over the planet.

Nicola's Strathspey: in the traditional strathspey, improvised embellishments, syncopated dotted rhythms and the use of space between notes create expectation, momentum and surprise. These same elements and their effect on the listener are mirrored in the blues.

Bye-Bye Breakdown: this is good ol' Saturday-night-barn-dance, hoedown fiddling. It revels in the whining cry of open double stops, in all types of musical onomatopoeia from train sounds to animal calls to country whistling, and in the steady 2/4 rhythm that is as basic as walking. The harmonic framework of several popular fiddle and folk tunes provides a practical grid for Nicky to cut challenging melodic and rhythmic figures. A relentless stream of sixteenth notes with double stops is designed to tire fiddler and dancers."

Nicola Benedetti commented, "This project has been a deeply edifying experience – one I will always reflect on with immense gratitude. It has been a privilege to learn and perform these two inspired and unequivocal masterpieces, and to deepen my understanding of Wynton's compositional language, cultural richness and philosophical insights. These compositions take us from the introspection of a Spiritual to the raucous celebration of a Hootenanny, from a lullaby to a nightmare, and from a campfire to a circus. We travel far and wide to distant corners of the world, the mind and the soul. Long-form musical pieces are often described as a journey. This sure has been a rich and fascinating one, and I am thrilled to now share the results with you."

Nicola Benedetti is one of the most sought-after violinists of her generation. Her ability to captivate audiences with her innate musicianship and dynamic presence, coupled with her wide appeal as a high-profile advocate for classical music, has made her one of the most influential classical artists of today.

With concerto performances at the heart of her career, Nicola is in much demand with major orchestras and conductors across the globe and frequently makes appearances in the world's leading concert halls.

Nicola records exclusively for Decca (Universal Music). Her 2016 recording of Shostakovich & Glazunov Violin Concertos was met with critical acclaim and described as her best recording to date. Her past eight recordings on Universal/Deutsche Grammophon include a varied catalogue of works from Szymanowski Concerto (London Symphony Orchestra/Daniel Harding) to Homecoming; A Scottish Fantasy, which made Nicola the first solo British violinist since the 1990s to enter the Top 20 of the Official U.K. Albums Chart. Nicola Benedetti was appointed a Commander of the Order of the British Empire (CBE) in the 2019 New Year Honours List, for services to music and was the Winner of the Best Classical Award at The Global Awards 2019.

Wynton Marsalis is an internationally acclaimed musician, composer, bandleader, educator and a leading advocate of American culture. He is the world's first jazz artist to perform and compose across the full jazz spectrum from its New Orleans roots to bebop to modern jazz. By creating and performing an expansive range of brilliant new music for quartets to big bands, chamber music ensembles to symphony orchestras, tap dance to ballet, Wynton has expanded the vocabulary for jazz and created a vital body of work that places him among the world's finest musicians and composers.