It's The Peace That Deafens 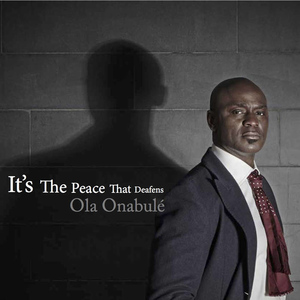 Ola Onabulé's album; "It's The Peace That Deafens" marks a departure from his previous two releases featuring a largely acoustic set, uniting Jazz, Soul and world influences. The Album contains 12 evocative songs about identity, reconciliation and nostalgia. Words, melodies and rhythms that walk a delicate tightrope of paradoxes, born of a childhood and adulthood immersed in two disparate cultures, on two different continents and at two different times.  "It's The Peace That Deafens" is as much a work of exploration as it is a declaration.

Ola states; "Hands-on, self-sufficiency has always been my mantra for survival in the music game. I always felt like the creative parts of song writing, producing and recording were merely different stages of a single process".

"It's The Peace That Deafens by singer-songwriter Ola Onabulé transports us back to his Nigerian roots ... the album is as rich as his African heritage. The sublime and subtle title ballad expresses in a few words the sensation of what happens when you are not true to yourself, if you do not speak out against injustice: "Gentle words, shrewd and false from lips that betray way deep... beaten down, deadened pulse...where defeat lives...." This is a dilemma explored by African novelists such as Chinua Achebe too, the clash and tug of war between old ways and new. But it is an African pulse (and to some extent a Bossa Nova and bluesy lilt) that drives this full-of-life album with melodies that soar and stay with you for a long time. They are powered by a beautiful clear voice that is both intimate and tender yet stadium-filling. It is a unique voice." - Mary James, The London Jazz News

"Ola Onabule, who packs more musical ideas into one song than many artists manage over an entire album, has issued an upbeat set of songs with a world infusion of music layered into jazz. ‘It's The Peace That Deafens' is a harmonious treat. These wonderful melodies and thrilling beats are infused with thoughtful lyrics, touching on the subject of belonging and identity, hope and love. One of Ola's greatest gifts is his vocal range. More often he sings in a deep, expressive baritone. This distinctive tone rises and falls, twists and turns as the rhythms of the music alter. With this expressive range, and one interconnected to the music, Stevie Wonder or Nat King Cole are probably his only vocal peers" - Royal Albert Hall Shows, Digital Journal 2015

"Ola Onabule's debut in Umbria Jazz, was not diminutive in any way. A warm voice and scenic elegance, Onabule was the star performer of the Arena, speaking to the audience, explaining the songs and joking. A full connection of humour which was appreciated by the audience, as in the case of the parody of his long African name. Powerful and overwhelming rhythms , that have been fully incorporated the musical roots of the Londoner with Nigerian origins: He moved effortlessly from Yoruba Afrobeat music to jazz, to arrive at the warm sounds of the soul". - Umbria Jazz Festival 2016, Piacere Magazine

"But the surprise of the evening was the debut of Ola Onabule, who opened the concert evening. The British Nigerian's style incorporates influences from Yoruba Afrobeat, jazz, and soul with lyrics that speak of an Africa with a thousand problems, but also with the boundless resources. In short, Onabule is a wonderful discovery!" - Umbria Jazz Festival 2016, Soundcontest

'The evening at the Arena hosted another debut for the Perugian event; Ola Onabule British singer-songwriter of Nigerian origin has deservedly achieved international fame thanks to its colorful soul-jazz which is full of rhythm and African influences, a set full of charm and melody' - Umbra Jazz 2016, La Notizia Quoti

"Onabulé explores jazz inclinations, world influences, and personal insights, presented in a sophisticated ambience. Blessed with a voice that spans three octaves, he utilizes his vocal skills in an instrumental manner, offering unique nuances, syncopation, and modulations. This record is a substantial convergence of introspection, dedication, and talent, showcasing a consummate performer at the crest of his craft." - James Nadal, All About Jazz 2016

"It's The Peace That Deafens - It's very much the singer's album. He has a high tenor, rich and warm right up to a particularly sweet high range (especially on the title track) with sometimes a touch of Michael McDonald's husky nuance (try Love Again or Orunmila). He also has a gorgeous sense of "funk-swing" for want of a better term (In Your Shoes). His song-writing is strong and varied in mood, sometimes incorporating tricky timing with aplomb (Orunmila), and the lyrics are intelligent and carefully expressed. Particularly outstanding is 'The Girl That She Was', a beautifully twisting and turning tune that Onabule navigates with easy style. Overall there is a graceful dignity about this music that fills the chest and raises the head." - Peter Bacon, The Jazz Breakfast

"A superb blend of raw rhythms from his African background, among other sources, and super- sophisticated,highly developed jazz-soul singing and songwriting" - Rob Adams, Glasgow Herald

'On Thursday 24th November 2016 - A special performance that ranked amongst the very best and leaves me bereft of sufficient superlatives to convey just how good Ola Onabule and his fellow musicians are. It's not as if I haven't seen Ola before, but in his nigh 2 year absence from Britain performing in substantial foreign venues, (aside from appearances at Royal Albert Hall at end of 2015 alongside Diana Krall), he has clearly honed his art to mesmerising levels. The quality and tone of his voice cannot be overstated as he delivered his unique blend of Jazz, Soul and world. There's a soulful richness that oozes from Ola that draws you in and enraptures you with every note. Ola performed material mainly from his latest album, "It's The Peace That Deafens" in which Ola has explored his world influences and those beautiful syncopated soulfulrhythms are infused with a blend of Latin or African flavours, which yield a sound that defies the stereotypical genre pigeon holing. All I can tell you is that it sounds fantastic. What enhances Ola's songs even further is the quality of the writing. Each song has an intelligent poetic strength and relevance, whether it reflects on the harsh realities of injustice, inner city strife or a heart wrenching love song'. - David Llewellyn, Jazz in Europe (Dec, 2016)

'It is apparent in how Ola infuses the elements embedded from the very beginning in the traditional use of the shout, the humming, the cries and the moans vocalists used as an essential part of their expression. Based on that, from my point of view Ola's vocal work is a pure historical representation of that tradition brought into a 21st century setting to today's audience many of whom have no idea of the history or of what went on before but are touched by that energy, the intensity and meaningful stories built into his songs and performances. Therefore, it might seem somewhat remarkable that a totally self contained artist such as Ola Onabulé comes along in this era and even more importantly in the jazz idiom. It is clear with his self assured approach as a consummate entertainer he invokes all that is contemporary at his disposal with his performances not limited to being just accompanied by a small group but also includes the power of the big band'. - Alfie Wade, Couleurs Jazz 2016

Herford, Germany - "Ola Onabulé is one of the great soul, jazz and blues singer songwriters of our time. In front of a sold out house, Onabulé gave a performance from a cross-section from his previous albums." - Sina Wollgramm, Neue Westfälische

Umbria Jazz Festival 2016 - "Ola Onabule il "Magnifico" - British-Nigerian artist Ola Onabule made his debut at Umbria Jazz. Although we are, again, in the macro category of performers, Onabule has a charisma and vocal elegance that makes it really a novelty in the world of male voices in jazz. We are not in front of a virtuoso circus of vocal cords, but a voice that can do what he wants and chooses time after time what to do! The mastery of of interpretation makes the difference between a tightrope walker singer and a great performer. At times in the concert last night I seemed to be listening to Al Jarreau at the beginning, Moreover, Onabule writes the lyrics and the music. ... Onabule also has the habit of dressing elegantly, without exception, to every concert. Unlikely, indeed impossible, to see him performing in jeans or without at least a tailored waistcoat. Even last night at the Arena Santa Giuliana, Onabule wore a perfect 3 piece suit the colour of sugar paper. Ola Onabule loves to talk with the audience and each piece he explained with humor and jokes with his audience who enjoyed participating, such as the parody of his long African name. The pieces presented in Perugia are part of his new album It's The Peace That Deafens, but Onabule does not give up singing some of his classic songs like Great Expectations . The difference between the new material and the old workhorses, is in the greater desire of the artist's ballads. An intimate and passionate work where the voice is the soul's megaphone for feelings, whatever they are. A beautiful concert, musically rewarding." - Carlo Vantaggioli, Tuttoggi (Jul 10, 2016)