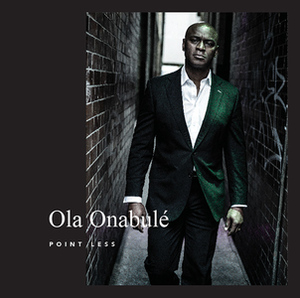 Socially conscious singer/songwriter Ola Onabulé has built an enviable career as an international touring performer and has now turned his attention to the North American market with a newly recorded collection of original songs. Onabulé's meticulous attention to detail in his arrangements and production as well as the support from Sennheiser/Neumann have contributed to the manifestation of an impressive recording.

Point Less, is a follow up to Onabulé's last album, It's The Peace That Deafens, with the new album boldly expressing his views on social injustice, reminiscent of Marvin Gaye's What's Going On. It is an activist's call - at once a celebration of life and a cautionary take on the social forces that threaten it. Violence, immigration, xenophobia, betrayal, and dignity are themes considered on Point Less, rendered with a powerful and knowing generosity of spirit. Onabulé is rueful yet optimistic.

So embodies the artistic - and entrepreneurial - philosophy of Onabulé, whose latest release, Point Less, is a giant leap forward in Onabulé's artistic canon. Moreover, it affirms his place among contemporary vocalists. He is a rugged individualist, a deeply soulful musician who has absorbed the surround sound of his youth - jazz,  world - and incorporated key elements into his distinctive style. He is direct and passionate, confident in his ability to sell a song with conviction.

This should surprise no one. Onabulé's performance history is vast. A host of winning projects with small groups and the big bands of Cologne (WDR), Stuttgart (SWR), Frankfurt (HRBB), Denmark (DRBB) and other prestigious aggregates animate his resume, as do the concert halls and international festivals that routinely invite him to perform - Montreal, Vancouver, San Sebastian, Istanbul, Umbria, and London, among them.

Onabulé's reach is global and he is emerging as a musician's musician, possessing a range and aptitude thatplace him on that shortlist of special artist andentertainer. His three-and-a-half octave baritone, the powerful emotions he conveys with it, and his elegant appearance connect with audiences around the world. Whether in person or on record, Onabulé gives his all, which includes a thoughtful interpretation of his experiences and the world aroundhim.

"Hands-on, self-sufficiency has always been my mantra for survival in the music game," says songwriter and producer, Ola Onabulé. "I always felt like the creative parts of song writing, producing and recordingwere merely different stages of a single process."

Point Less is a cunning play on words that captures current and artful observations sure to resonate with fans, old and new.

THROWAWAY NOTION [5:18] - Discussions about immigration, expressions of xenophobia left fallow for some time have reseeded themselves and become acceptable again. The disconcerting speed with which noble and lofty ideals can be eroded and replaced with fear and mistrust of the outsider, the effective and cruel genius of 'scapegoating' them for the misdeeds and failures of people in power.

THE OLD STORY [5:22] - This song is written from the point of view of a man, who has just extinguished the life of another. He has the authority to do so but nonetheless the extent of his powers does not sit easy with him. Asking himself philosophical questions of the society that gives him the power to decide over life and death of his fellow human beings, and he ponders the historical context that allows him to wield said authority.

POINT LESS [5:33] - An exploration of the pointlessness of violence, a tendency to point the finger of blame at the victims of violence. The subjugated affected by violent culture, ironically have a tendency to enact greater violence on one another. It uses a play on the words 'point' and 'less' and the word 'pointless' to explore these complex relationships.

AND YET [5:32] - 'And Yet' begs the question: if we are fundamentally all the same, why is it so easy to dehumanize marginalized people? It takes an askance look at all the counter-intuitive scenarios that a member of such a group may find themselves in. It explores how such scenarios can rapidly descend into unexpected and sometimes dire consequences.

EXIT WOUND [5:21] - After a tragic loss, a parent is inundated with words of condolences and must ponder the real value and meaning of these words. Do words have any meaning if they are unyoked from deeds and action?

WHAT THE HECK [6:02] - A bold and powerful nation with imperial ambitions must confront the fact that absolute power may not always equate to certain victory. It must come to terms with the possibility that in this world, other forms of strength and resilience exist. Sublime and transcendental forces, unseen by the naked eye, but infinitely more effective at motivating hearts and minds than brutish strength and bombast.

BALLAD OF THE STAR CROSSED [6:02] - This ballad tells the tragic story of a young man who was fatally shot in the presence of his partner and their infant daughter. It is inspired by real events and is an imagining of the moment when his partner realizes he may pass from this realm to the next.

I KNEW YOUR FATHER [5:13] - A foreign, long distance observer's reaction to the events that 'Ballad Of The Star Crossed' attempts to document as they watch them unfold in the media. The observer tries, unsuccessfully to comprehend and untangle the complex social anomalies that make these shocking harrowing events possible.

SURU LERE [5:38] - Historically, Suru Lere was a place that returnee African-Americans settled in the late 19th century and early 20th century in Lagos. It is idealized here in this song and used as a metaphor for peace of mind and social tranquility. The song exhorts children of the diaspora to return to a metaphorical Suru Lere and free themselves from the aberrations of racial politics that afflict them.

TENDER HEART [5:20] - Pays tribute to people who dare to stand alone and be the first to declare an uncomfortable truth.  These early adopters of a pertinent but unspoken truth show superhuman mental strength that is belied by their presumed vulnerability.

CONCEIVE IT [5:01] - The song invites the listener to imagine a dystopian world in which the unthinkable is the norm and suggests in conclusion that the world they are being asked to imagine is the one they actually inhabit.

SO THEY SAY [5:54] - This song explores the notion that essentially, we are all someone else's 'They'. It is inspired by the Rudyard Kipling poem: 'We and They'.

PAS FAMILLE [4:48] - It's about betrayal. This is not betrayal on a personal level, say, between a man and a woman or between two friends. This is the notion of a betrayal of one's tribe, class or race.

DIGNITY [5:51] - The clue is in the title with this song, but the twist is that the lyrics contend that there is great dignity in choosing to live without violence and weaponry even in an arena of brutal hostilities, especially if said tools of violence typically and ultimately do most of the harm to ones own community.

YOU CAN'T DEPEND ON LOVE [5:32] - A simple song about love. Not to be confused with a love song. Love has worth...but only when the energy is expended in sharing and giving rather than obsessing about gaining and keeping.

All photos of Ola Onabulé by Alfred George Bailey.

All About Jazz - US by Mark Sullivan

Onabulé is the whole package, a powerful expressive singer and a striking songwriter with incisive things to say about contemporary society.

Onabulé (has) incisive things to say ... always in a poetic way, he is no mere polemicist.

Throwaway Notion is a catchy  tune  with a Pan African groove, and very dark lyrics about the current race to the bottom in politics around the world.

A vocalist with a hot and liquid baritone who is able to pour his lyrical vocalastics into higher registers with masterful elasticity so that he has command of three and a half registers in all.

This vocal project has a very special feeling of authenticity about it...

In Point Less, Mr Onabulé negotiates the repertoire revealing exactly what it means to have the kind of vocal flexibility with which he has been blessed..

His gift for phrasing as well as delivering the music, muscularity and rhythmically deliberate in places but with oomph and gravitas in the big vocal apostrophes.

Throughout Mr Onabulé judges the balance between words and music to perfection anchoring his art with typical clarity and swirling dramatic twists and turns, ...adding African style ornaments and wailing protementos .. making for a poignant delivery that can only be described as the ‘poetry of emotion.

Beauty of tone is often melded into dramatic interpretation of text ... Mr Onabule emerges as the silent actor of night who promotes a theatrical sense of space throughout the song.

Mr Onabulé's refined naturalness of delivery is highlighted as is his phrasing which is crafted with elegance and the gentlest of vibrations ..

This is a striking piece of recorded work from a prodigiously gifted musician with a very special vocal instrument.

JAZZIZ Magazine by Brian Zimmerman - US

Point Less, is an even more meticulous exploration of social themes, with music that takes an unflinching aim at some of the most pressing issues of our present moment - global injustice, xenophobia, nationalism, civil unrest and violence - through music that nonetheless uplifts and exalts the good in all people.

Rock and Roll Globe by J. Poet - US

Ola Onabulé's sound is hard to pin down .. He effortlessly blends West African and Caribbean rhythms with American blues, jazz and soul.... He delivers his highly melodic compositions with a four octave voice that can be as smooth as velvet or gritty as a Stax/Volt hit from the early 70s.

The tone of the music, the passion that Onabule endows upon the lyrics, and the stories that he tells in these tunes reflect an understanding that the urgency of the times has increased while the world's understanding of the challenges and willingness to meet them has not.

On Point Less, singer/songwriter Ola Onabulé makes music that is both timeless and timely. Point Less is timeless in the sense that Onabulé embraces a sound that his defiantly analog.

This album fuses, jazz, funk and elements of African, Caribbean and Brazilian bossa nova, just to name a few...employing a top notch band on a project that takes listeners back to a time when musicians came together to create under one roof.

The themes that Onabule addresses on this album, such as xenophobia, warfare, environmental degradation and political corruption, possess a timeless quality as well. Marvin Gaye addressed those themes in one of music's most timeless works of art.

Point Less is an album that calls the listener to action. You may want to dance, or you want to march. But Onabulé's latest will make it hard for folks to stay in their seats. Strongly recommended. HOWARD DUKES

"Point Less" is a long album yet it is worth taking your time to explore. Ola Onabulé writes all the music and lyrics, produced these sessions, and released it on his own label. He has stories to tell with a voice that does just honestly, melodically, soulfully, and without pity but filled with empathy. There's power in the rhythms and the beats as well.

British-Nigerian singer-songwriter, whose music has the harmonic complexity and melodic precision of jazz standards, but with equal consideration given to how everything comes together rhythmically

Lyrics, delivered with Broadway clarity by Onabulé... are concerned with violence, immigration and xenophobia. It sounds heavy, and they're serious songs, but Onabulé's music seems to come from a euphoric center.

Onabulé slides notes into intervals you'd have thought too narrow to fit, slipping through transition notes that seem to guide the harmony behind him. there are good vocalists and then there are vocalists who are very much musicians, and Onabulé's nimble delivery de"nitely puts him in the latter category.