Peter Manning Robinson was born in Chicago and grew up in Vancouver, Canada and Los Angeles, California. Peter started playing the piano at age 3 and began performing with bands by the time he was 12. Though touring and playing in clubs at a young age, he still managed to receive formal music training at USC and Berklee College of Music in Boston. He has performed and recorded with such jazz greats as Ernie Watts, Phil Woods and Freddie Hubbard. Peter's film and television scores have won him many awards including an Emmy Award for KABC's A​bove and

His orchestral works have been recorded by members of The London Philharmonic, Los Angeles Chamber Orchestra, and Musica Nova.

In his early 20s, Peter developed severe tendonitis and was told by numerous doctors he would never be able to perform live again. Still able to play for short periods of time, he immersed himself in session work and film scores but was determined to resume live concertizing. Through a mutual friend, Peter met Phil Cohen, Founder/Artistic Director of the Leonardo Project at Concordia University in Montreal. After evaluating Peter, Phil told him he could retrain him but he would have to, in Phil's words: "unlearn everything you know about playing the piano." Peter agreed and through Phil's techniques, he developed a completely new way of playing within a year.

During this time Peter continued to evolve his already healthy lifestyle to encompass vegan food, meditation, yoga, kick­boxing and growing his own herbs and produce. An accomplished vegan chef, he uses a unique nutritional regimen to keep his mind, body and spirit optimally fit. Peter views both his refractor PianoTM and his kitchen as "laboratories" where his complex cooking recipes inspire new music compositions and vice­versa.

He met director and filmmaker Klaus Hoch while scoring Klaus's film F​lypaper a​nd​r​econnected in 2010 to collaborate on the creation of The Refractor PianoTM. The Refractor PianoTM is the culmination of Peter's life­long work and experimentation with alternative forms of musical instruments (acoustic, Asian and electronic). In April 2016, Peter presented his acclaimed debut concert with The Refractor PianoTM at Bergamot Station, Santa Monica incorporating both his Refractor and acoustic piano compositions with unique visual elements.

The Refractor PianoTM is an acoustic piano (usually a Steinway), fitted with transducers and microphones, whose live sound is "refracted" through a unique, proprietary system of hardware and software created by pianist­composer Peter Manning Robinson and co­developed by filmmaker Klaus Hoch.

Mimicking visual refraction or quantum refraction, the instrument, when played by Peter, is capable of generating a remarkable array of never­heard­before sounds. The music incorporates both

composition and improvisation and while each piece is always recognizable, the "refraction" process makes each performance unique and never an exact reproduction. One can think of the "refraction" process as layers of sound that are uniquely manipulated, morphed and layered. These sounds create chambers that open and flow, in numerous ways, to other chambers that can exist individually or intersect and "refract" each other. This creates an ever­changing, evolving sound.

Peter decides which elements to "refract" in real time and "rides the refractions" as he and The RefractorTM bend and morph the sound. These new textures form the distinct instruments and voices of each composition. Using the entire piano­­­inside and out­­­with his fingers, mallets, and other implements, Peter conjures never­heard­before sounds in this new type of music. Thus Peter is functioning as a composer, pianist, and conductor in real time. With compositional foundations in classical structure and jazz improvisation, the new "Refractor Music" played by Peter creates a truly unique, transcendent live music experience. "Refractor Music" needs to be heard live!

"... something new in some quite delightful ways ... The refractions create a spectrum of sound as colorful and vivid as a rainbow, with Peter responding to the refractions with a virtuosic touch..."

"S​ome of the most original music since Olivier Messiaen. The listener is assaulted, disturbed, enveloped, given new

Titus Levi of C​ontemporary Keyboard c​ommented,​"​With Lisztian abandon, Robinson is obviously at home in free­form atonal music while maintaining both his classical and his jazz roots." 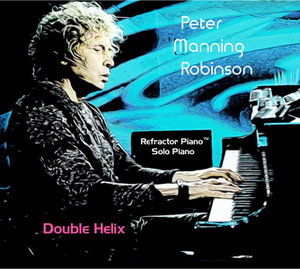 Multiple award-winning composer and pianist Peter Manning Robinson, will be releasing his debut double-CD album titled DOUBLE HELIX with Heart Dance Records this spring on Friday, Sept. 25th. Robinson is the inventor of The Refractor Piano™ and showcases his unique style and original compositions, colors and sounds, which he calls "Refracted Music" on his new release.

"the title Double Helix refers to the two strands of piano music on this album. On one disc are eight very evocative, transformational, solo piano improvisations and on the second disc are eight "Refractor Piano™ music" pieces - a new, innovative way to create immersive, never heard before music using my invention: a "Refracted", acoustic piano. "Like the helixes of DNA, the two intertwined strands of music are aspects of the same musical voice." -  Peter Manning Robinson.