Piotr Beczala is widely acknowledged as one of the most exciting, impressive, and sought-after lyric tenors of our time. The Polish-born artist is acclaimed by audiences and critics alike for not only the beauty of his voice, but also for his ardent commitment to each character he portrays.

Piotr Beczala kicks off the 13-14 season with two season opening productions in a row: first, he will be heard as Lensky in the Metropolitan Opera's new production of Eugene Onegin, then returns to the Teatro alla Scala to sing Alfredo in a new production of La traviata. He returns to the US to perform the Prince in Dvorak's Rusalka at the Metropolitan Opera and Gustavo III in Un ballo in maschera as well as concerts of Verdi's Messa da Requiem for the San Diego Opera. In Europe he sings Rodolfo in Paris and can be heard in the title role of Gounod's Faust at the Vienna State Opera. Piotr Beczala can be heard in concert in Berlin, Munich, Baden-Baden, London and Prague and returns to the Salzburg's Whitsun Festival to perform Rossini's Stabat Mater under the baton of Sir Antony Pappano.

Season 12-13 started with a return to the Teatro alla Scala Milan, where Piotr Beczala sang Rodolfo in Puccini's La Bohème, followed by performances as the Prince in Dvorak's Rusalka and celebrating his 20th stage anniversary with a concert at Theatre Wielki in Warsaw. In December Piotr Beczala was not only heard as Rodolfo at the Vienna State Opera but also sang the Christmas in Vienna Concerts at the Konzerthaus and end the year with a return to Dresden, where he will sing the New Year's Eve concerts with Christian Thielemann at the Semperoper. In the Metropolitan Opera's new production of Verdi's Rigoletto Mr Beczala was heard as Duca (the production is released on DVD and Blu-ray with Deutsche Grammophon) and afterwards starred as Faust in Gounod's homonymous opera. In June he sang the tenor part in Verdi's Requiem at Opera Bastille in Paris and at the Verbier Festival led by Gianandrea Noseda. The season ended with some more Verdi: He sang Alfredo in Munich and the Verdi Requiem with the Salzburg Festival under the baton of Riccardo Muti. With Vienna State Opera Piotr Beczala performed Roméo in Gounod's Roméo et Juliette in a production by Jürgen Flimm and under the baton of Plácido Domingo. In autumn 2012 Mr Beczala signed an exclusive recording contract with Deutsche Grammophon, his first solo album with the Yellow Label My Heart's Delight -a tribute to Richard Tauber was released in May 2013.

Mr. Beczala's 2011-12 season found the tenor in many of the world's music capitals, beginning in Switzerland with the company which had long-served as his artistic home, the Zürich Opera, where he was initially heard as the Duca di Mantova in Rigoletto with Diana Damrau and Leo Nucci; three subsequent company engagements followed in the spring. For his first time at the Gran Teatre de Liceu he participated in concert performances of Faust; Krassimira Stoyanova and Erwin Schrott share the spotlight. At the Royal Opera, Covent Garden he appeared as Alfredo in La traviata, with Ailyn Pérez and Simon Keenlyside co-starring. He rang out the old year with a pair of New Years' Eve all-Lehár concerts at Dresden's Semperoper with Christian Thielemann leading the Sächsische Staatskapelle. These performances were televised and released in CD and DVD formats by Deutsche Grammophon in January 2012.

Mr. Beczala started 2012 by appearing as Il Duca di Mantova in Rigoletto at Paris' Opéra Bastille opposite Nino Machaidze and eljko Lucic. Audiences at the Metropolitan Opera were treated to his first time singing the Chevalier des Grieux in a new Laurent Pelly production of Manon, with Anna Netrebko as the work's eponymous heroine; Fabio Luisi conducted. The matinee performance of April 7 could be seen in movie theatres throughout the U.S. and in over 50 countries as part of the Met's Live in HD series, and was released in DVD format and shown on public television networks worldwide. He gave his first U.S. recital in Santa Monica, California as part of the Eli & Edythe Broad Stage series, accompanied by pianist Brian Zeger. Returning to the Zürich Opera, audiences had the opportunity to see him in three contrasting capacities: as a soloist for a concert featuring some of Richard Strauss' orchestral songs conducted by Christoph von Dohnányi; as Riccardo in Un ballo in maschera; and as Rodolfo in La bohème. In the season's remaining months he performed twice in Salzburg, first as part of the Festival's Whitsun offerings, singing the Brahms cantata Rinaldo with Sir John Eliot Gardiner leading the orchestra of the Bayerischer Rundfunk. Shifting to the Austrian capital, he rejoined Diana Damrau, this time in the Wiener Staatsoper's Lucia di Lammermoor, before returning to Salzburg for the summer Festival's new Damiano Michieletto production of La bohème with Ms. Netrebko as Mimì and Daniele Gatti wielding the baton. The first night was beamed in HD to movie theatres and received a DVD release (Deutsche Grammophon).

Piotr Beczala was born in Czechowice-Dziedzice in Southern Poland and received his initial vocal training at the Katowice Academy of Music, where he was given instruction by such illustrious singers as Pavel Lisitsian and Sena Jurinac. His first engagement was at the Landestheater Linz and in 1997 he became a company member of the Zürich Opera, a distinction he still enjoys. During that time he appeared in a wide array of lyric roles, providing an excellent foundation for his subsequent development into the major artist he is today.

The period between 2004 and 2006 became particularly noteworthy, as it saw him rise to international prominence, beginning with his debuts at Covent Garden (Der Rosenkavalier/Apr. '04), where he was subsequently seen and heard in Faust, Rigoletto, Eugene Onegin, the Verdi Requiem, La bohème, Roméo et Juliette and La traviata) and his U.S. debut at the San Francisco Opera (Eugene Onegin/Nov. ‘04, followed by Die Zauberflöte and La bohème). La Scala welcomed the tenor in 2006 in Rigoletto (preceded by a 1997 orchestral concert led by Riccardo Muti) and the Metropolitan Opera also opened its doors to him that year (Rigoletto/Dec. '06, followed by reengagements in Lucia di Lammermoor [HD relay, subsequently released on DVD], Eugene Onegin, La bohème, Roméo et Juliette). He accompanied the Met on its post-tsunami tour of Japan (June '11) for performances as Rodolfo, Edgardo and in an all-star concert at Suntory Hall. Since that time he has also made appearances at: De Nederlandse Opera, Théâtre de la Monnaie/de Munt, Staatsoper Hamburg, Deutsche Oper Berlin, Staatsoper Berlin, Grand Théâtre de Genève, Teatro Comunale di Bologna, Teatr Wielki (Warsaw), and the Mariinsky Theatre, among many others. In addition to his operatic work, he has sung many of the great choral and orchestral vocal works with the world's most distinguished orchestras and maestri.

Piotr Beczala's is represented on dozens of CDs in a vast array of works, ranging from staples of the repertory, including a live Faust from Vienna on Orfeo & La traviata from Munich on Farao (nominated for a 2008 Grammy Award), to such rarely-heard works as Szymanowski's Król Roger and Offenbach's Rheinnixen – both on the Accord label, and Johann Strauss II's Simplicius on EMI. Scheduled for release in February 2012 by Deutsche Grammophon is his New Year's Eve all-Lehár concert recorded live at Dresden's Semperoper with sopranos Angela Denoke and Ana Maria Labin; Christian Thielemann leads the Dresden Staatskapelle. Earlier this season a recording of Lucia di Lammermoor became available with Valery Gergiev leading his Mariinsky Opera forces on the Company's own label; Natalie Dessay is heard in the title-role.

His DVD releases include a series of performances from the Zurich Opera including: Rigoletto, La traviata, Die lustige Witwe, Die Entführung aus dem Serail, Die Zauberflöte and Simplicius (all on Arthaus), as well as Don Giovanni (EMI). Also available are Der Rosenkavalier (TDK) from Salzburg, Don Giovanni (Decca), and Lucia di Lammermoor from the Met (DG). Other recent DVD releases include the Beethoven Symphony No. 9 with Christian Thielemann leading the Wiener Philharmoniker (Unitel/C Major) and the Farewell Concert for the Wiener Staatsoper's longtime Intendant, Ioan Holender (DG), among many others. 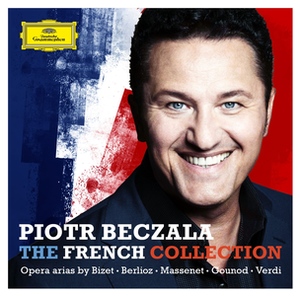 The kind of singing found in French operas written during the 18th century was based on a great theatrical tradition, namely, the tragedies of Corneille, Racine and Voltaire, with their declamatory type of verse-speaking. This meant that for French singers clarity of diction was more important than the quality of their tone, a quality that was to be one of the prerequisites of the bel canto school of singing of the later period. All of this changed with the founding of the Théâtre Italien in 1801. When Rossini took over the running of this last-named company in 1824, he found many good French singers. He was followed to Paris – then the center of the operatic universe – by Bellini, Donizetti and Verdi. Their works were performed – and in some cases premiered – by outstanding French singers. It is with excerpts from the principal works of this tradition that the Polish tenor Piotr Beczala faces up to a challenge that is testing from both a technical and an interpretative point of view, demanding, as it does, a particular understanding of the French vocal idiom.