1
From Now On (The Greatest Showman)
2
Moving Too Fast (Last Five Years)
3
You?ll Be Back (Hamilton)
4
Waving Through a Window (Dear Evan Hansen)
5
It All Fades Away (Bridges of Madison County)
6
What You Own (Rent)
7
Let It Go (Frozen)
8
Mary Jane (Jagged Little Pill)
9
Anthem (Chess)
10
I Will Always Love You (The Bodyguard)
11
Wicked Little Town (Hedwig and the Angry Inch)
12
Is This the World We Created (Queen) 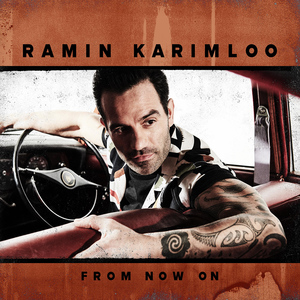 Tony® Award-nominated singer and performer RAMIN KARIMLOO today releases his second full-length album, From Now On, via Sony Masterworks Broadway. the 12-song collection places the consummate showman behind the mic for a series of musical theater and film covers that illuminate the range of his instantly recognizable voice.

"Recording this album in the studio has been one of my favorite experiences of my career," says Ramin.  "Having producer Bob Held at the helm and my band recording songs we had toured with over the years was pure joy.  There's nothing better than being in the studio with friends and making music we love.  I wouldn't have wanted to do it any other way or with any other team.  I'm so proud of what we produced and can't wait to share it with the world."

From Now On is just the latest in what is shaping up to be a big year for Ramin.  The singer most recently performed alongside Barbra Streisand, joining the legendary icon onstage for a duet at her July show in London's Hyde Park.  The news follows what has already been a big year for Ramin, who kicked off 2019 with his headlining U.K. From Now On Tour in addition to joining the cast of the hugely popular BBC One medical drama series Holby City.

The album is representative of both where Ramin came from and where he's going, combining his lifelong love of music and musical theater into an inimitable, impassioned, and indelible body of work. After turning forty in 2018, Ramin heard "From Now On" from the Academy® Award-nominated film, prompting the singer to look inward, reflecting on his life and career up to that point.

"The first time I heard ‘From Now On', the lyrics meant a lot to me," Ramin says.  "At this point, I had been with my band for so long it was probably the most consistent thing in my life apart from my wife and kids. I chose to put what was happening inside of me into our own version with those lyrics. It felt right. Without thinking about it, I came towards all of the other songs afterwards."

Accompanied by a group of musicians he refers to as his "Broadgrass" band, a term coined by the artist to denote a fusion of styles between classic Broadway songwriting and a homegrown folk instrumentation, Ramin followed this original inspiration, introducing his new album with a rousing rendition of The Greatest Showman track.  Incorporating fiddle, banjo and a piano into the arrangement, the album's title track and lead single is indicative of the stylistic choices taken on From Now On, informed both by Ramin's personal influences and the music itself.

"The term ‘Broadgrass' originated onstage, as a way for me to leave the theatre for a bit while still getting to sing the songs that I love," Ramin says.  "As time went on, we found a sound as a band. We didn't apologize for how we approached songs, or worry about what the purists would think."

Harnessing the collective energy of his onstage performances, Ramin and his Broadgrass band evolved into something that felt right for the new project.  With a rush of excitement, he dove into the new album.  Over the course of just four days, Ramin and the band had recorded the remaining eleven tracks comprising From Now On in Long Island alongside producer Bob Held [Paul Rodgers, Joe Bonamassa].  With music ranging from modern juggernauts like Hamilton, Frozen, and Dear Evan Hansen to classics such as Hedwig and the Angry Inch and The Last Five Years, he curated the project like the ultimate concert setlist, recording the bulk of material live in the studio.

"No matter how unrelated the tracks may seem, they all connect," Ramin explains of his multifarious song choices.  "I had an interest in telling these stories and reinterpreting them musically. The band really has a shorthand together. They know how I'm going to sing sometimes before I even start.  We aimed to honor the original drama, but put our own stamp on each one. How can we tell the story without losing the intent?"

He answers this question on the album's second offering, an incendiary performance of "What You Own" from Rent. Upheld by a steady beat and resounding guitars, his voice adds raw and real power to the lyrics.  Elsewhere, he strips "I Will Always Love You" down to acoustic guitar, piano, and vocal. Over this soft palette, he brings palpable intimacy to a tune so often associated with its overpowering bombast.  In the end, Ramin catalogs his illustrious journey in song and, more importantly, embarks on the next chapter.

"When you listen to the music, I hope you can take some sort of courage and conviction from it," he leaves. "These songs give me that. Believe in yourself. I believe many of these authors convey a message of self-confidence. I'm transmitting it in my own way."

ABOUT RAMIN KARIMLOO - Iranian-born Canadian singer and performer Ramin Karimloo is one of the most formidable talents in musical theater and beyond.  Discovering The Phantom of the Opera at just 12-years-old, the singer fulfilled a lifelong dream at the age of twenty-six when he made his West End debut as the youngest Phantom ever.  Perhaps best known for his immortalization of the role, Ramin performed in the 25th Anniversary Concert of Phantom of The Opera at The Royal Albert Hall, which became one of the most widely viewed shows in PBS history.  Continuing the Phantom's legacy, he originated the leading role in Love Never Dies, the sequel to Phantom of the Opera, earning him an Olivier Award nomination.  Ramin famously breathed new life into Les Misérables hero Jean Valjean for the production's Broadway resurrection and received a 2014 Tony® Award nomination in the category of "Best Actor in a Musical." Gracing hallowed stages around the globe, his credits span Les Misérables at the O2 Arena in London, Anastasia on Broadway, and Chess at the Kennedy Center.  In between, he launched a successful career as a solo artist. His growing discography encompasses the 2012 full-length debut, Human Heart, and a trio of EPs-Within the Six Square Inch (2007), The Road to Find Out: East (2014) and The Road to Find Out: South (2016).  Most recently joining the cast of the hugely popular BBC One medical drama series Holby City, Ramin now releases sophomore album From Now On via Sony Masterworks Broadway.