One of the most beloved and celebrated singers of our time, soprano Renée Fleming captivates audiences with her sumptuous voice, consummate artistry, and compelling stage presence. At a White House ceremony in 2013, President Obama awarded her the National Medal of Arts, America's highest honor for an individual artist. Known as "the people's diva" and winner of the 2013 Grammy Award for Best Classical Vocal Solo, she continues to grace the world's greatest opera stages and concert halls, now extending her reach to include other musical forms and media. In recent years, Renée has hosted a wide variety of television and radio broadcasts, including the Metropolitan Opera's Live in HD series for movie theaters and television, and Live From Lincoln Center on PBS. She brought her voice to a vast new audience in 2014, as the first classical artist to sing the National Anthem at the Super Bowl.

As a musical statesman, Renée has been sought after on numerous distinguished occasions, from the 2006 Nobel Peace Prize ceremony to performances in Beijing during the 2008 Olympic Games. In 2014, she sang in the televised concert at the Brandenburg Gate to commemorate the 25th anniversary of the fall of the Berlin Wall. In 2012, in an historic first, she sang on the balcony of Buckingham Palace in the Diamond Jubilee Concert for HM Queen Elizabeth II. In January 2009, Renée was featured in the televised We Are One: The Inaugural Celebration at the Lincoln Memorial concert for President Obama. She has also performed for the United States Supreme Court and, in November 2009, celebrated the 20th anniversary of the Czech Republic's "Velvet Revolution" at the invitation of Václav Havel. A ground-breaking distinction came in 2008 when Renée became the first woman in the 125-year history of the Metropolitan Opera to solo headline an opening night gala.

A four-time Grammy winner, Renée won the 2013 Best Classical Vocal Solo Grammy Award for Poèmes (Decca, 2012), a collection of 20th-Century French music, including works composed especially for her by Henri Dutilleux. Her most recent album Distant Light was recorded with the Royal Stockholm Philharmonic and released in January by Decca. It features Barber's Knoxville: Summer of 1915, The Strand Settings, composed for Renée by Anders Hillborg, as well as songs by Björk in new orchestral arrangements. In 2015, she was featured with Yo-Yo Ma on the Billy Childs album, Map to the Treasure: Reimagining Laura Nyro, their track "New York Tendaberry" winning the Grammy for Best Arrangement, Instruments and Vocals.  Her first-ever holiday album, Christmas in New York, was released in 2014, and was the inspiration for a special on PBS.  In June 2010, Decca and Mercury records released the CD Dark Hope, which features Renée covering songs by indie-rock and pop artists. Her recent opera dvds include Strauss's Arabella and Ariadne auf Naxos, and Donizetti's Lucrezia Borgia. Other recent DVD releases include Handel's Rodelinda, Massenet's Thaïs and Verdi's Otello, all three in the Metropolitan Opera Live in HD series, and Verdi's Traviata, filmed at London's Royal Opera House. Ms. Fleming's 2010 DVD Renée Fleming & Dmitri Hvorostovsky: A Musical Odyssey in St. Petersburg follows Renée and baritone Dmitri Hvorostovsky to Russia, where they explore and perform in some of St. Petersburg's most historic locations. In recent years, this fourteen-time Grammy nominated artist has recorded everything from Strauss's complete Daphne to the jazz album Haunted Heart to the movie soundtrack of The Lord of the Rings: The Return of the King. She recorded Alexandre Desplat's theme song, "Still Dream" for the soundtrack of the Dreamworks Animation feature, Rise of the Guardians. Her recording honors range from the 2009 Echo Award for Strauss's Four Last Songs to the Prix Maria Callas Orphée d'Or by the Académie du Disque Lyric for TDK's DVD production of Capriccio. In February, 2012, Renée received the Victoire d'Honneur, the highest award conveyed by the French Victoires de la Musique.

In 2013, Renée joined with the John F. Kennedy Center for the Performing Arts to present American Voices, a concert and 3-day festival celebrating the best American singing in all genres. The festival was the subject of a Great Performances documentary on PBS in January of 2015. In January 2017, Renée  spearheaded a similar cross-genre celebration of singing and community, Chicago Voices, at Lyric Opera of Chicago, with a gala concert telecast on public television. In May 2016, she sang in the National Memorial Day Concert with the National Symphony Orchestra, telecast from the lawn of the U.S. Capitol on PBS.

Renée Fleming's artistry has been an inspiration to many other prominent artists, such as Chuck Close and Robert Wilson, whose portraits of her were included in the Metropolitan Opera's 2007 fundraising auction. Two portraits of Ms. Fleming were also created by Francesco Clemente, who revealed one in Salzburg in spring 2007, with the Metropolitan Opera displaying the other in 2008. Photographic portraits include works by Brigitte Lacombe and Irving Penn, among others. In June of this year, the Annie Leibowitz portrait of Renée was added to the permanent collection of the National Portrait Gallery in Washington, DC. Nelson Shank's portrait of Renée in the title role of Rusalka is on display in the portrait gallery of the Metropolitan Opera.

Renée Fleming is a champion of new music and has performed works by a wide range of contemporary composers, including recent compositions by Anders Hillborg, Henri Dutilleux, Brad Mehldau, André Previn, and Wayne Shorter. Among her numerous awards are Germany's Cross of the Order of Merit (2015); the Fulbright Lifetime Achievement Medal (2011); Sweden's Polar Prize (2008); the Chevalier de la Légion d'Honneur from the French government (2005); Honorary Membership in the Royal Academy of Music (2003); and honorary doctorates from Harvard University, the University of Pennsylvania, Duke University (2015), Carnegie Mellon University (2012), the Eastman School of Music (2011) and The Juilliard School (2003), where she was also commencement speaker.

An advocate for literacy, Renée Fleming has been featured in promotional campaigns for the Association of American Publishers (Get Caught Reading), and the Magazine Publishers of America's READ poster campaign for the American Library Association. She was honored by The New York Public Library as a "Library Lion." Her book, The Inner Voice, was published by Viking Penguin in 2004, and released in paperback by Penguin the following year. The paperback edition is now in its sixteenth printing. An intimate account of her career and creative process, the book is also published in France by Fayard Editions, in the United Kingdom by Virgin Books, by Henschel Verlag in Germany, Shunjusha in Japan, Pro Musica Mundi in Poland, and by Fantom Press in Russia.

In addition to her work on stage and in recordings, Renée Fleming has represented Rolex timepieces in print advertising since 2001. In 2008, she launched La Voce by Renée Fleming, a fragrance designed for her, with the proceeds benefiting the Metropolitan Opera. Master Chef Daniel Boulud created the dessert "La Diva Renée" (1999) in her honor, and she inspired the "Renée Fleming Iris" (2004), which has been replicated in porcelain by Boehm. Having been added to Mr. Blackwell's best dressed list, her concert gowns have been designed by Reem Acra, Gianfranco Ferré, John Galliano for Dior, Douglas Hannant, Christian Lacroix, Oscar de la Renta, Angel Sanchez and Vivienne Westwood. In June of 2014, the Smithsonian added the gown designed by Vera Wang for Renée's Super Bowl anthem performance to the permanent collection of the Museum of American History. In addition to serving as the face of opera for two public transit campaigns in New York and London, Renée has appeared on The Late Show with David Letterman (famously singing the Top Ten List), The Martha Stewart Show, Spectacle: Elvis Costello with…, The View and Prairie Home Companion as "Renata Flambé," among numerous other media outlets.

In 2016, Renée was appointed Artistic Advisor-at-Large for the John F. Kennedy Center for the Performing Arts. She is currently a member of the Board of Trustees of the Carnegie Hall Corporation, the Board of Sing for Hope, the Board of Trustees of Asia Society, and the Artistic Advisory Board of the Polyphony Foundation, which works to bridge the divide between Arab and Jewish communities in Israel by creating a common ground where young people come together around classical music. She is a creative advisor to AIR, the Association of Independents in Radio. In 2010, she was named the first-ever Creative Consultant at Lyric Opera of Chicago, where she is also a member of the Board and a Vice President. At Lyric Opera of Chicago, she curated the creation of a world-premiere opera based on the best-seller Bel Canto for Lyric Opera's 2015-2016 season. A performance of the production was telecast on PBS Great Performances in January. 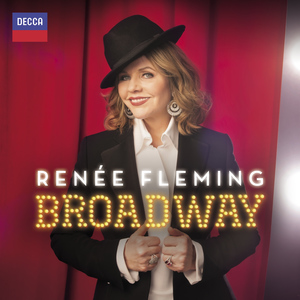 Currently wowing theatre-goers in the US with her Tony-nominated performance in Carousel, Grammy-winning soprano Renée Fleming announces her new album ‘Broadway', to be released on Decca Classics on Friday 7th September. Celebrating musical theatre, the album features a diverse array of great songs for the stage by composers including Stephen Sondheim, Andrew Lloyd Webber, Pasek & Paul, and Rodgers & Hammerstein, as well as a special guest duet with the Hamilton, television and film star, Leslie Odom, Jr.

Fleming made her Broadway musical debut this April as Nettie Fowler in the hit new production of Rodgers & Hammerstein's beloved Carousel. She received glowing reviews and even a Tony nomination – the prestigious awards ceremony takes place this Sunday. The Hollywood Reporter described her performance in Carousel as "superb" and "sheer euphoria", and Newsweek said, "she is divine".