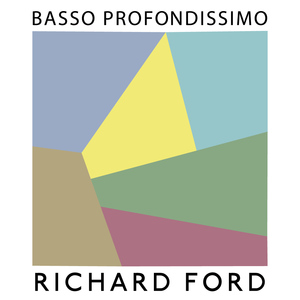 "Richard coaxes moods and melodies from the bass guitar. This music is both new and reﬂective. Creating sonics not heard from the bass, transporting the listener in new and often cinematic ways, Richard Ford's ‘Basso Profundissimo' is a real treat for the listener." -  Rick Frystak, KPFK Radio Los Angeles

"I just love the place you are on this record. It all feels like home to me...love that the outcome is as beautiful as it is." -
Steve Kempster, music producer

The musical world of Basso Profondissimo springs from the imagination of English bassist and producer Richard Ford. The collection was conceived and played on bass, creating a unique and surprising melding of sounds and adding some rough edges to the genres of jazz, ambient, bossa nova and neoclassical.

Sharing some of the same musical landscape as Sigur Rós, Lyle Mays, Bebel Gilberto, ECM Records, and Bill Frisell, Basso Profondissimo employs a cinematic language, often minimal and evocative. There are surprising moments, as when softer passages burst into something rougher and edgier. In the neoclassical-leaning pieces, unexpected elements surface, like ﬂoating transparencies revealed from somewhere back in the scenery. Elsewhere, bubbling rhythms emerge, cracking pieces open into exotic meters. This is not a work concerned with virtuosity (though references to seminal bassists like Jaco Pastorius can be heard in places). This collection is about evoking moods and character, not about ﬂash.

Basso Profondissimo was recorded in Venice, California in the spring and summer of 2018, rooted in Richard's preferred creative method:  "I use my bass to chalk out ideas and the music takes off naturally from there."

All of the tracks were executed on basses, multi-tracked and treated. As Richard started to experiment with vocals (specifically the addition of the amazing Costa Rican vocalist Michelle Gonzalez) new possibilities emerged - including a full-blown, fresh cover of George Duke's Brazilian-inﬂuenced 'Malibu', which features a handful of world-class jazz musicians, among them renowned keyboardists Kait Dunton and Peter Gabriel alumnus Simon Clark.

The seeds of Basso Profondissimo were sown in late-80s New York, where Richard had begun recording demos, exclusively with basses. He was soon playing concerts in downtown performance spaces, both as a soloist and with his ‘Electric Bass Quartet'.  As he recalls, "There was a certain freedom to working solely with bass - and also an imperative to be sonically creative in new ways. The perceived limitations became inspiring challenges."

The project was put on hold when Richard moved to Los Angeles to work in film and film music. In that role, he has been an important member of director Alexander Payne's creative team since 1998, earning credit as Executive Music Producer on their last three projects together (The Descendants, Nebraska and Downsizing). As an Emmy-winning ﬁlm music editor, he's played a role in many successful productions, among them American History X, Training Day, Sideways, Argo, and Hidden Figures.

Much of his work in film has involved reconstructing and remixing the music of others. While this has been creatively challenging, Richard felt "the itch to get the basses out of the closet and create something that truly came from me." Basso Profondissimo began to unfold.

Born in London, Richard grew up in a musical family, immersed in the classics from an early age. He began performing as a boy, in Andrew Lloyd Webber and Tim Rice's choir. His love of music eventually led to the bass, and he developed into an accomplished player. He has toured and recorded with many artists, including the revered guitarist Bill Nelson (in his band Red Noise) and upon moving to the US, singer-songwriter Joe Jackson.

In New York, Richard discovered and embraced an ever-expanding world of music and culture - perhaps most significantly through his study of African and Afro-Caribbean music and dance. The rhythms he found there grew to become part of his musical DNA.

These vast and varied inﬂuences have informed all of Richard's work and shaped the rich diversity evident in Basso Profondissimo. This signature collection is the culmination of Richard Ford's extensive musical journey to date.