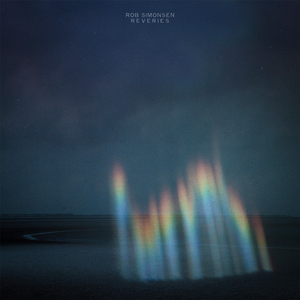 Sometimes, if you want to live the dream, you need to let the dream come to you. Just ask composer Rob Simonsen, who began playing the piano at a young age, picking out melodies he heard in his parents' record collection, before he began composing for himself. "I daydreamed a lot when I was young," he remembers. "I'd sit at the piano, and it was very much about escape: letting my mind wander, exploring."

Nonetheless, Simonsen's deep habit of daydreaming is at last gratifyingly indulged on his long-awaited solo debut RÊVERIES, announced today for a September 6th release date on Sony Music Masterworks. It's an elegant, affecting collection which puts the piano – though not just any piano – in the spotlight, furnishing it with blissful embellishments, both electronic and analogue. The announcement of the album comes along with the new video for the album track "Coeur", directed by Simonsen himself and premiered via Stationary Travels. "It's quite the return to my roots," Simonsen says, "sitting and improvising, having it be emotive and cathartic. I didn't sketch anything in advance, nor come at it from an intellectual perspective. It started by chasing a feeling while recording." The album is now available for preorder.  Watch the new video for "Coeur" here.

Simonsen recorded RÊVERIES with what he calls "this magical beast of a piano" in four 2-3-week sessions over the course of a year, letting his mind drift for up to an hour at a time, just as he had as a child, before using the most rewarding excursions as the foundations for more formal, complex pieces. As he composed for brass, for strings, for choir, he reveled simultaneously in Paris' picturesque winter or marveled at the studio's old school recording methodology, one Neff suggested had occasionally been "forgotten" amid the contemporary shift to digital recording. Nonetheless, Simonsen kept things simple: he stuck largely to traditional song forms and simple melodies, "but," he says, "rendered in a – hopefully – more unique, processed way. I wanted to keep it classic but forward-thinking."

That said, RÊVERIES' title is indicative of something more profound: of allowing things to unfold in their own time, and of their own nature. Not that Simonsen lacks ambition: since the early 2000s, he's worked on an expansive list of film soundtracks, among them Foxcatcher, Nerve, The Way, Way Back and most recently Jason Reitman's The Front Runner and Rupert Wyatt's Captive State. There have been collaborations, too, notably with Mychael Danna – including 500 Days Of Summer – and contributions to Life Of Pi and Moneyball, as well as, earlier, outings under the name Frozen Light, encouraged by Keith Kenniff (Helios, Goldmund). But Simonsen's been biding his time since an early age, quietly nursing the artistic flights of fancy in which he'd step out from behind the screen. When the stars finally aligned, he knew, these would seem rather less fanciful.

That moment was heralded in 2016, when Simonsen flew from Los Angeles to Paris to work on Hugo Gélin's Demain Tout Commence. It was far from his first trip to Europe: it's a part of the world in which he feels unusually at home, and he visits as often as he can. It was, however, his first time recording in Paris, and the technical approach exercised by the engineers with whom he worked – evident in their love for vintage analogue gear and microphones – proved crucial. The facility, Studios St Germain, belonged to the film's music supervisor, Raphaël Hamburger, son of legendary French singers Michel Berger and France Gall, and their work over a good month or two proved so satisfying that, when it was over, all involved agreed Simonsen should come back to record his oft-promised, oft-fantasized solo debut.

This quest for the perfect instrument, and the discovery of individuals whose recording habits chimed with his own aesthetic, was a dream come true for Simonsen, whose entire perspective on his art had already been transformed by a trip to Berlin a few years earlier. There he'd found himself surrounded by a nest of musicians whose lifestyles and creative approaches resonated in an unexpectedly deep fashion. Whether Dustin O'Halloran, the late Jóhann Jóhannsson, Hildur Guðnadóttir, Francesco Donadello, Kira Kira, or Hauschka, these artists relished not only the creation of music, but also the manner in which it was made. "I came back to LA," Simonsen recalls, "and thought, ‘I want to have those conversations here. I want to be able to go to a church and see a little concert. I want to connect more with people doing interesting explorations, and thinking deeply about their art.'"

At this point, though, instead of channelling his energies into turning his hazy dream of a solo album into reality, Simonsen had chosen to co-found The Echo Society, a non-profit artist collective, with a number of acquaintances and friends. "It was born out of a desire to get together with like-minded people, to inspire each other and create something that excites us." They began setting up an annual show, at first working separately on their compositions and, later, collaborating, all the time encouraging one another artistically. It was, in a sense, another creation of a dreamlike realm, and another vital step towards RÊVERIES, which would finally take flight a few years later in a barn in the French countryside.

That it's entitled RÊVERIES is indicative of the record's chimerical nature. "Ondes" builds gently like the waves after which it's named, its arrangement swelling and subsiding with a natural grace, while the exquisite "Coeur" lingers over its heartfelt sentiments. There are, of course, echoes of others: one can identify respectful nods to, for instance, Claude Debussy and Erik Satie in Envol and Nuit Tombante, while "Rêve" offers a stillness A Winged Victory For The Sullen might crave. But even in the restraint of "Spectre", it's clear Simonsen's fashioned his own world, one every bit as enchanting as childhood's raptures.

Inspired by his European surroundings, and emboldened by both his adventures with The Echo Society and his experiences with O'Halloran and his Berlin friends, RÊVERIES is the culmination of a lifetime of making music, a dream made serene reality. There are nine dreams, in fact, and having given them the necessary time and space to arrive, Simonsen is now eager to share them. On this occasion, there's no need to wait. As Simonsen knows, one's mind is always eager to wander. The trick is just to let it.