The career of Roberto Alagna could well be made into a novel. He was born of Sicilian parents settled in the Parisian suburbs. In the family, everybody sang, and he was not (was he told) the most talented: he was sometimes told to be quiet when his uncle with the sunny voice sang. But he had a calling. He honed his vocal technique listening to the recordings of the great tenors of the past, and following the guidance of an old master, Rafael Ruiz. For years, he spent his nights singing old tunes and playing the guitar in the cabarets. But deep inside, he was fond of opera, and his idol was Pavarotti. So when the tenorissimo came to Paris to sign autographs in a department store, young Alagna sneaked through the crowd, managed to approach him and tell him a few words. The right words undoubtedly, as he was then invited to audition by the maestro. He went there and earned a ticket to the finale of the Pavarotti Competition in Philadelphia – which he won. This was 1988; he was twenty-four years old.

Alagna's voice was then bright and radiant. It was the voice of the Italian tenor people dream about. Glyndebourne called him to play Alfredo in La Traviata. He then performed in Monte Carlo, and soon after at La Scala with Riccardo Muti, portraying Alfredo with rare fervor. After that, he played the Duke of Mantua in Rigoletto, once again with Muti, and Rodolfo in La Bohème. In just a few years, the greatest international stages, from New York to Vienna and London, opened their doors to him; the greatest conductors were honored to direct him; everywhere he was acclaimed.

His life took a new turn in 1994, when he was granted the role of Romeo in Gounod's Roméo et Juliette. The lyrical prodigy displayed unheard sensitivity and diction. People wondered about his precursors: Vanzo? Thill? But he alone could bring such grandeur and poetry to the French scene. He was rightfully making history and, in 1995, received the most prestigious British theatre award, the Laurence Olivier Award, for this performance. Celebrated when he sang the Italian repertoire, he had become a unique and indispensable asset to the French repertoire. His characterization of Don Carlos in London and then in Paris in 1996, of des Grieux, Werther, Faust, Don José and even Edgardo in Lucia di Lammermoor stood out and established him in as one of the top singers of his time.

In the 2000s, his voice broadened and darkened. He added key roles of the Italian opera to his repertoire – Manrico, Canio, Radamès, and even excerpts from Otello. Enthusiastically pursuing his exploration of French roles, he relived long-forgotten operas: Lalo's Fiesque in 2006, Massenet's Le Jongleur de Notre-Dame in 2007 and Alfano's Cyrano de Bergerac in 2005, which he performed with youthful flamboyance. This curiosity seduced contemporary composers: Vladimir Cosma tailored for him the role of Marius in Marius et Fanny, premiered in 2007 in Marseille with his wife Angela Gheorghiu, and his brother David wrote Le dernier jour d'un condamné, premiered in July the same year. Few lyrical artists have the ability to follow so many different paths!

Roberto Alagna's discography reflects the scope of his musical curiosity. Under exclusive contract with EMI from 1993, he recorded the major operas of the French (Manon, Werther, Don Carlos, Carmen) and Italian repertoires (La Bohème, La Rondine, Tosca, Il Trovatore, Verdi's Requiem). For other labels, he recorded L'elisir d'amore, Rigoletto and La Traviata. He performed unexpected recitals, devoted to Berlioz or to rare arias of the French repertoire. In 2004, he signed an exclusive contract with Deutsche Grammophon. His first album at DG, Roberto Alagna chante Luis Mariano, brought him fame beyond the frontiers of the lyrical art and went double platinum.

His album Sicilien, released at the end of 2008, yielded tremendous success: over 350,000 copies sold. Sicilien is a comeback to his roots and introduces a lyrical and popular repertoire. This success was prolonged by a national and international tour in 2009 and 2010 and the release of a live CD and DVD, recorded in the Arena of Nîmes in August 2009.

DVDs hold a central place in this discography. Concerned about the truthfulness of theatre, Roberto Alagna reveals the range of his dramatic palette in very varied roles: a moving Nemorino (L'elisir d'amore, Decca), an almost fragile Radamès (Aida, Decca), an enthusiastic Cyrano (DG). He even takes an interest in production techniques, for instance with I Pagliacci (DG). Stage director Benoît Jacquot asked him to play Mario in the film version of Tosca (2001), which spotlights the performance of singers-actors.

Adopted by a broad public, Roberto Alagna appears on television sets where he performs with pop singers, participates in charity concerts (Michael Jackson & Friends) or exceptional events – in 2002 and 2003, he sang for the Pope in Rome. On his own admission, the high point of his career remains his performance, on July 14th 2005, of the French national anthem on the Champs-Élysées, in front of the official gallery.

Although his recordings and performances have earned him the highest musical and official awards (he was made knight of the French Legion of Honor in 2008), Roberto Alagna is not idling his time away. His schedule for the years to come includes major roles, such as Paolo in Francesca da Rimini, recently acclaimed in Paris and unanimously praised by the critics, Le Cid, Maurizio in Adriana Lecouvreur, etc.

Roberto Alagna's gamble has now paid off: he has become a popular singer, known and loved by a broad audience, without renouncing the standards of the great lyrical repertoire. Better yet: his tours with the repertoire of Luis Mariano, comprised of traditional Sicilian songs, and soon with the Spanish repertoire, contested by some "purists", allow Alagna's voice to ripen and let him enrich his artistic identity in contact with various audiences. We already knew about crossovers, that is when a lyrical artist explores more popular territories – jazz, musicals or folk songs. Alagna managed to merge two types of repertoires into a single career, which remains unique in the lyrical world.

As a consequence, at an age when other tenors start to feel somewhat drained, Alagna tackles these great roles with unbelievable freshness, on the world's greatest stages, at a pace no-one but him could withstand. Add to that his perpetual risk-taking and the surprising initiatives the tenor embarks on, on a crush or by instinct.

To those artists (even the youngest of them!) who are looking for the secret of eternal youth, Alagna could certainly answer: generosity, a love for the audience . . . and unfailing enthusiasm!   Sylvain FORT 12/2011

Polish-born soprano Aleksandra Kurzak began her musical education at the age of 7, playing violin and piano. She studied voice at the conservatories of Wroclaw and Hamburg. She made her professional opera debut at the age of 21 at the Wroclaw State Opera as Susanna in Le Nozze di Figaro. Her mother and teacher Jolanta Żmurko performed the role of Countess. Kurzak is a laureate of singing competitions in Warsaw, Barcelona, Helsinki and Canton. In 2009 she received a PhD in Music.

In 2004 Kurzak made her debut at The Metropolitan Opera in the role of Olympia in Les Contes d'Hoffmann. In the same season she debuted at the Royal Opera House-Covent Garden as Aspasia in Mitridate, Re di Ponto. The artist returned to the Met, singing Blonde in Entführung aus dem Serail, Gilda in Rigoletto, Gretel in Hansel & Gretel and Adina in L'Elisir d'amore. Since her first London appearance, Kurzak has returned regularly to the Royal Opera House, where she has performed roles of Norina (Don Pasquale), Adina (L'elisir d'amore), Susanna, Matilde (Matilde di Shabran), achieving a real triumph on this stage and most recently as Fiorilla (Turco in Italia), Rosina (Il Barbiere di Siviglia), Gilda and the title role in Lucia di Lammermoor.

In February 2010 Kurzak made her debut at the Teatro alla Scala in the role of Gilda and returned as Susanna and Adele in Le Comte Ory.

Aleksandra Kurzak has an exclusive recording contract with DECCA.

In the season 2016/2017 Kurzak will appear Mimi at the Staatsoper in Berlin, Micaela in Opera de Paris, Adina at the Deutsche Oper Berlin, as well as Adina and Liu at the ROH. 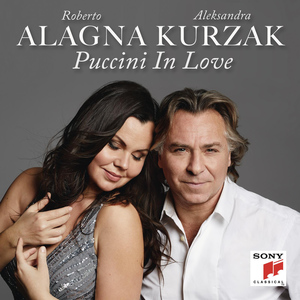 Now star tenor Roberto Alagna and his wife, the Polish soprano Aleksandra Kurzak, have made the most poignant duets from Puccini's operas the focus of their first collaborative album, excerpts from Manon Lescaut, La Fanciulla del West, Madama Butterfly, Il tabarro, and of course La bohème – music brimming over with passion and powerful emotions, brilliantly composed for the voice, and subtly orchestrated for the orchestra. The new production features Riccardo Frizza conducting the Sinfonia Varsovia Orchestra.