A savvy songwriter and a powerhouse vocalist, McKelle has long found a home where soul, jazz,pop, gospel, blues and the American Songbook cross paths. In her live performances, she exudes a bandleader's moxie that recalls the Rat Pack era.  While comparisons to Ella Fitzgerald are common because of her warm alto voice, her early influences were mostly Aretha Franklin, Tina Turner and Janis Joplin.  McKelle's voice mirrors the power of those three vocal titans while maintaining the refined nuances of Fitzgerald.  In her early days, McKelle shared the stage with such prestigious artists as Michael McDonald and Bobby McFerrin.

McKelle's seminal album Introducing Robin McKelle featuring the vocalist performing a list of standards of the jazz repertoire afront a big band, was released in 2006.  This release was followed by 2008's big band release Modern Antique.  2010's Mess Around featured McKelle with a paired down ensemble and a repertoire running the gamut from jazz to soul to pop.

There's an insightful storyteller's voice that connects her songs, a narrative thread that feels smart and soulful. In her songwriting and in the arrangements/production of the album, she mixes her varied influences together with strength and grace. 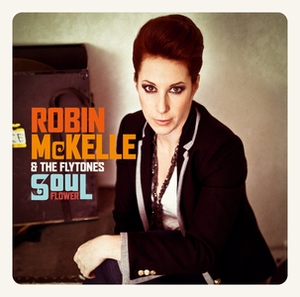 Robin McKelle might have called this album The Real McKelle. "It's the record I've always dreamed of making. Not that there was anything stopping me in the past, it's simply that things panned out differently." The singer herself wrote most of the songs on this new production, a contemporary blend of soul and rhythm 'n' blues that avoids today's retro tendencies. "I love that music so much that I couldn't see myself doing something ‘in the style of…". I grew up listening to Nina Simone and Gladys Knight. I sang their classics and what I enjoy most today is building my own repertoire in that same soulful vein." Soul Flower mainly consists of original tracks along with a few covers, including an upbeat Walk On By.