The Austrian pianist, Rudolf Buchbinder, studied with five years of age the youngest student ever to be admitted to the
Vienna Musik Hochschule, began his comprehensive musical career as chamber musician. His main teacher there was Bruno Seidlhofer. In 1965 he made a tour of North and South America. In 1966 he won a special prize awarded at the Van Cliburn International Piano Competition.

Subsequently Rudolf Buchbinder has toured with the Wiener Philharmoniker and appeared as soloist around the world, including Paris, Milan, Madrid and London. In 1975 he made a tour of Japan and the USA with the Wiener Symphoniker. He subsequently toured extensively, appearing as a soloist with leading orchestras and as a recitalist, and is regular guest at
the Salzburger Festspiele and
all other major festivals.

Rudolf Buchbinder's repertoire is extensive and includes numerous 20th century compositions. He attaches considerable importance to the meticulous work of the study of sources. He disposes of more than 18 complete editions of L.v. Beethoven's Sonatas and has an extensive collection of first editions and original documents. Moreover, he possesses the autographs of the piano parts and of the scores of the two piano concertos by Johannes Brahms as copies. One of his major concerns is the interpretation of the "New Testament" in piano-repertoire, the cyclic performance of all 32 piano-sonatas by L.v. Beethoven, which he played in over 30 cities including Munich, Vienna, Hamburg,
Zürich and Buenos Aires.

Over 100 records provide proof of the extend and abundance of Rudolf Buchbinder's repertoire. For the outstanding recording of the complete piano work by Joseph Haydn, he received the "Grand Prix du disque." He has recorded the complete L.v. Beethoven piano sonatas and variations for the Teldec label. The Frankfurter Allgemeine Zeitung entitled Buchbinder for his complete recording of this sonata cosmos as "one of today's most important and competent Beethoven-performers." He does not only devote himself to the classic-romantic music, he also recorded rarely performed pieces such as the collection of
"Diabelli-Variations" composed by
50 Austrian musicians.

Meanwhile Rudolf Buchbinder prefers live-recordings. His cycle of all Mozart piano-concertos with the Wiener Symphoniker, live recorded at the Vienna Konzerthaus, was acclaimed by the famous critic Joachim Kaiser as CD of the year 1998. In the Johann-Strauss-Year 1999, Buchbinder released an exceptional CD of piano-transcriptions entitled "Waltzing Strauss". His latest hallmarks of live-recordings represents both J. Brahms piano-concertos with the Concertgebouw Orchestra Amsterdam under the direction of Nikolaus Harnoncourt and all five L.v. Beethoven piano-concertos with the Wiener Symphoniker as soloist and conductor on the occasion of the Wiener Festwochen 2003. The concerts with the Wiener Philharmoniker on the occasion of the Wiener Festwochen constituted a highlight of the season 2005-2006; the programme consisted of the 12 piano concerts by Mozart and has been recorded on DVD.

Rudolf Buchbinder also has taught piano at the Basel Academy of Music. In his spare time, he is interested in literature as well as in fine arts and whenever there is an opportunity between rehearsals and concert tours, he enjoys himself as an impassioned amateur painter. Furthermore, Buchbinder is the artistic director of the [Music-Festival Grafenegg], a new major international Austrian festival for classical music close to Vienna. His biography An artist´s portrait by Michaela Schlögl was published in
August 2008 by Styria Verlag. 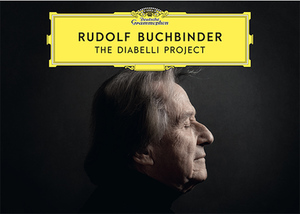 Buchbinder, who recorded Beethoven's Diabelli Variations early in his career, has invited 12 contemporary composers to write their own variations on Diabelli's theme – which he will then record for DG and perform live on tour in 2020. His chosen contributors are: Krzysztof Penderecki, Rodion Shchedrin, Brett Dean, Max Richter, Jörg Widmann, Toshio Hosokawa, Lera Auerbach, Brad Lubman, Philippe Manoury, Johannes Maria Staud and Tan Dun.

Buchbinder's new commissions echo the original story behind the Diabelli Variations. In 1819, music publisher and composer Anton Diabelli wrote a 32-bar "Deutscher", or German Dance – a forerunner of the waltz – and sent it to more than 50 Austrian composers, asking each of them to write a variation on his original theme. Diabelli received contributions from Carl Czerny, Franz Schubert, Mozart's son Franz Xaver, Johann Nepomuk Hummel and Franz Liszt, who was barely eight years old when the invitation was issued. Beethoven initially refused to write anything, and supposedly dismissed the theme for its banality – but four years later he sent the publisher his own Thirty-Three Variations on a Waltz by Diabelli. The set, later hailed by conductor Hans von Bülow as a "microcosm of Beethoven's genius", turned out to be the composer's last completed large-scale piano work.