Sol Gabetta achieved international acclaim upon winning the Crédit Suisse Young Artist Award in 2004 and making her debut with Wiener Philharmoniker and Valery Gergiev. Born in Argentina, Gabetta won her first competition at the age of ten, soon followed by the Natalia Gutman Award as well as commendations at Moscow's Tchaikovsky Competition and the ARD International Music Competition in Munich. A Grammy Award nominee, she received the Gramophone Young Artist of the Year Award in 2010 and the Würth-Preis of the Jeunesses Musicales in 2012.

Following her highly acclaimed debuts with Berliner Philharmoniker and Sir Simon Rattle at the Baden-Baden Easter Festival in 2014 and at Mostly Mozart in New York in August 2015 this season sees Gabetta debut with Los Angeles Philharmonic and Houston Symphony. She will also perform with Tonhalle-Orchester Zürich and St Petersburg Philharmonic Orchestra and will tour with Orchestre de Paris, Il Giardino Armonico, Rotterdam Philharmonic Orchestra and Dresdner Philharmonie with whom she is Artist in Residence this season. Brussels' Palais des Beaux Arts will also welcome her as their resident artist. To conclude 2015/16 Gabetta will join the Royal Concertgebouw Orchestra on a European tour with performances at Lucerne Festival, Grafenegg Festival as well as Salzburger Festspiele.

She also collaborates extensively with conductors such as Giovanni Antonini, Mario Venzago and Krzysztof Urbański.

In summer 2014 Gabetta was Artist in Residence at the Schleswig-Holstein Musik Festival, having already held residencies at the Philharmonie and Konzerthaus Berlin. She is a regular guest at festivals such as Verbier, Gstaad, Schwetzingen, Rheingau, Schubertiade Schwarzenberg and Beethovenfest Bonn.

As a chamber musician Gabetta performs worldwide in venues such as Wigmore Hall in London, Palau de la Música Catalana in Barcelona and the Théâtre des Champs-Élysées in Paris, with distinguished partners including Patricia Kopatchinskaja and Bertrand Chamayou. Her passion for chamber music is evident in the Festival ‘Solsberg' which she founded in Switzerland.

Sol Gabetta was named Instrumentalist of the Year at the 2013 Echo Klassik Awards for her interpretation of Shostakovich's Cello Concerto with Berliner Philharmoniker and Lorin Maazel. She also received the award in 2007, 2009 and 2011 for her recordings of Haydn, Mozart and Elgar Cello concerti as well as works by Tchaikovsky and Ginastera. With an extensive discography with SONY she has also released a duo recital with Hélène Grimaud for Deutsche Grammophon.

Thanks to a generous private stipend by the Rahn Kulturfonds, Sol Gabetta performs on one of the very rare and precious cellos by G.B. Guadagnini dating from 1759. Gabetta has taught at the Basel Music Academy since 2005. 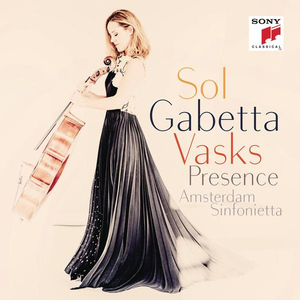 For her latest album Vasks: Presence (Sony Classical)  - cellist Sol Gabetta has recorded works by one of her friends, the contemporary Latvian composer Pēteris Vasks. At the heart of album is the world-premiere recording of the composer's Second Cello Concerto, Klātbūtne - Presence, a lyrically cantabile and tonally sensuous work that is dedicated to the cellist, which she premiered in 2012 with the Amsterdam Sinfonietta under Candida Thompson.