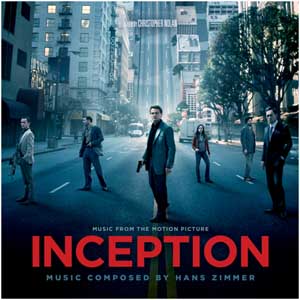 "Inception: Music From the Motion Picture" was released July 13 on CD by Reprise/WaterTower; a vinyl edition will follow Aug. 3. To build on the sales of his and Nolan's previous film score projects, Zimmer engaged in a number of promotional appearances -- underscoring a new all-hands-on-deck mentality for soundtrack promotion.

During the afterparty for the film's Los Angeles premiere July 13, Zimmer and Smiths guitarist Johnny Marr -- who performs on eight of the soundtrack's 12 cuts -- played selections from the score alongside a 20-piece orchestra. The concert was streamed live on Ustream.

Hans Zimmer has composed scores for more than 100 films, among them Rain Man, The Lion King, Gladiator and The Dark Knight, and has won an Academy Award, two Golden Globes and three Grammys for his work. But while working on his latest score, for the new film Inception, he ran into a conundrum.

"There was a moment I was sitting there, and this tune was materializing out of nowhere," says Zimmer, 52. "But I couldn't quite figure out what the sound was."

Days later, he solved the puzzle: He was channeling Johnny Marr, guitarist of The Smiths, The The and Modest Mouse. Zimmer had never met Marr, and Marr had never written a film score. Yet Zimmer called the English musician and invited him to play electric guitar on the otherwise orchestral soundtrack.

For Marr, 46, "it was a no-brainer. I love his work. And you have this assumption that when you like someone's work, you'll get along as people."

The sci-fi thriller stars Leonardo DiCaprio as a thief who can enter the dreams of others and steal their secrets, an eerie premise matched by the score's haunting arrangements and electronic distortions. The score is already getting noticed as a potential best-score Oscar nominee andmarks Zimmer's third film with director Christopher Nolan (in addition to Dark Knight, Zimmer collaborated with James Newton Howard on music for Nolan's Batman Begins).

Worn out after doing the music for last winter's Sherlock Holmes movie, Zimmer was looking forward to a break. But after a meeting with Nolan during shooting in London, "the inevitable happened," Zimmer says.

"Two days later we were at a studio with a 22-piece brass section making a racket."

Marr added his guitar late in the recording process. After the pair's first face-to-face meeting in London, Zimmer returned to Los Angeles, intending to fly back across the Atlantic to finish the project. But Iceland's Eyjafjallajokull volcano grounded his flight when it erupted in April, leaving Marr to add his part alone.

"Hans trusted me to take care of his tunes," Marr says. "So I locked myself away for an intense few days."

The results of Marr's work, Zimmer says, were an "affirmation that my instincts were right about him."

"Even though he was playing the notes as they were written, they were just little black dots on paper," Zimmer says. "It takes a man of great courage and emotion to infuse each note with a bit of magic and boldness."

Their collaboration continued for the film's July 13 premiere in L.A., where they took the stage with a 20-piece orchestra. Zimmer played piano and says that having Marr onstage helped allay his own "serious stage fright."

"The man knows what he's doing," he says. "I could hide in his shadow. It was perfect."

For Marr, it was an honor to "have the good fortune to play these tunes," he says. "After the rehearsal, I took a look (at the orchestra) and thought, 'Wow, I've got a pretty good group.' "

The positive reactions of Nolan and producer Emma Thomas (who is married to Nolan) to the performance were "wonderful," Zimmer says.

"Chris Nolan is in the business of blowing people's minds," he says. "It's occasionally good to get your revenge.