• In December, 2002 their first album "Voices of Heaven" was recorded and went on to reach the No. 1 spot on Billboard's World Music Chart within 3 weeks of its release in the US

• In the same year, they won an American Gospel Music Award for "Best International Choir"

• They performed for President Bill Clinton at a corporate function in Little Rock, Arkansas

• They featured on a guest appearance with Diana Ross, Deborah Cox and Danny K for the "Unite of the Stars" Gala Banquet in South Africa in November 2006

• At the same time, they were nominated for the 26th International Reggae and World Music Awards, held at the Apollo Theatre, Harlem, on 5 May, in the category "Contribution to World Music", alongside Jimmy Cliff, Salif Keita, Youssou N'Dour and Ziggy Marley

• In May 2007, the choir won a SAMA Award (South African Music Association Award) in the Category "Best Live Performance DVD"

• To add to their string of national and international awards, in November 2007 Soweto Gospel Choir won a Metro FM Music Award for Best Gospel Album  for "African Spirit", based on nominations submitted by the radio station's listeners, and the public

• In February 2008, the choir was awarded a second Grammy Award for their third album "African Spirit", in the "Best Traditional World Music" category

• Also in February 2008, the choir was honoured with the PanSALB Award for  Multilingualism and Nation Building, for "Album of the Decade"

• While in New Orleans, they recorded a track with rock legend Robert Plant, which was included on a Fats Domino tribute album, with proceeds going to the victims of Hurricane Katrina

• Their 46664 London performance of "Weeping", with Josh Groban and Vusi Mahlasela, is featured on Josh's latest album "Collection"

• Soweto Gospel Choir received its third Grammy nomination in December 2008, this time in the category Best Contemporary World Music, for their album, "Live at the Nelson Mandela Theatre"

• The song "Down To Earth" from the blockbuster Wall-E movie, their collaboration with Peter Gabriel, won a Grammy in the Best Movie Song category

• In February 2009, the choir became the first South African artist to perform at the Academy Awards, when they sang "Down To Earth", the Gabriel/Newman Oscar-nominated song, with John Legend

• In March 2009, they were nominated for three SAMAs (South African Music Awards), for their cd and dvd, "Live At the Nelson Mandela Theatre", winning the Award for "Best Duo or Group"

• In May 2009, the choir was invited to perform at the Inauguration of South Africa's new President

• In November, members of Soweto Gospel Choir were flown to Los Angeles to take part in a major Pepsi advertising campaign, alongside Akon and Keri Hilson

• In April 2010, Soweto Gospel Choir was honoured with the inaugural International Achievement Award, at the South African Music Awards held at Sun City.

• Also in April, the choir was invited to perform at the Opening Ceremony of the 2010 World Trade Expo, held in Shanghai, as the African representative.

• The choir collaborated with U2, as the featured South African artist, on the songs "Streets Have No Name", "Magnificent" and "Boots" for ESPN's promotional campaign for the 2010 World Cup. Excitingly, the campaign paid dividends, as along with ESPN and U2, Soweto Gospel Choir received a Sports Emmy Award as winners of the Outstanding Music Composition/Direction/Lyrics category on 2 May 2011.

• They can then add an Emmy to their two Grammys, three ‘associated ‘Grammys, three SAMAS and one Oscar nomination – an amazing achievement

• The choir has also been featured in several prestigious magazines and books including in Time magazine and in Andrew Zuckerman's "Music", alongside such music heavyweights as Russell Simmons, Herbie Hancock, Ozzy Osborne, John Legend and Mark Knopfler

• They performed at the FIFA World Cup Kick-Off Concert in Soweto, the night before the the opening of the World Cup in June, with a international and African line-up including the Black-Eyed Peas, Shakira, Angelique Kidjo and John Legend.

• In December 2010, Soweto Gospel Choir received its fourth Grammy nomination, in  the Best Traditional World Music category, for its album "Grace". The choir was featured alongside the London Philharmonic Orchestra in the song "Baba Yetu" and on the album "Calling All Dawns", both of which won Grammys in February 2011

• From May – July 2011, members of the choir toured Australia, New Zealand and Fiji, to rave reviews, while others performed in Guadeloupe , French Caribbean

• Soweto Gospel Choir joined Archbishop Desmond Tutu and his guests for his 80th birthday celebrations, held in Cape Town in October 2011. They performed at the launch of his new book, and backed Bono on "I Still Haven't Found What I'm Looking For", as a surprise for the Arch. They also sang with other artists at both the cathedral service and the private luncheon for their patron. Bono described them as "brilliant"!

• They performed with leading South African artists at the ANC Centenary Celebrations in Bloemfontein on 8 January 2012.

• In June 2012, Soweto Gospel Choir was invited by South African sensation Zahara, to perform with her and special guest Leroy Bell as part of two sold out concerts that were filmed for her forthcoming dvd.

• Other artists the choir performed with in South Africa  during 2012, as their special guests, were Andre Rieu and Johnny Clegg

• In December, Soweto Gospel Choir was nominated for its second Kora (All Africa) Award

• They are also Ambassadors for SHOUT, 1Goal, United Nation's MDG Envoys for Africa and Interpol's "Proud to Be" campaign

• Soweto Gospel Choir has founded its own AIDS orphans foundation, Nkosi's Haven Vukani, to assist organisations that receive little or no funding. To date, the choir has collected over R5million for their foundation.  In South Africa, the choir performs for a variety of charitable organisations.

WHAT PEOPLE ARE SAYING ABOUT SOWETO GOSPEL CHOIR:

"There is simply no flaw here" - Evening News, Scotland

"When they open their mouths, the sense of texture is flawless…here is energy and passion in song" -  Business Day, Johannesburg

"The public will be blown away" -Daily Sun, Johannesburg

"This is a tour de musical force….Soweto Gospel Choir is a slice of musical heaven" - Australian Stage, Melbourne

"Occasionally, a diamond of such brilliance is unearthed that you find yourself compelled to develop a near-fanatical enthusiasm for it" - Manchester News

"Meticulous and unstoppable…spirited and spectacular" - The New York Times

"I was left awestruck by the choir's majestic and moving performance. There is no equal to their passion and power" - Three Weeks, Edinburgh

"You can't fake those smiles…nor can you fake the sheer joy in just being alive which seemed to govern every move by these colourfully clad singers, dancers and instrumentalists". - The West Australian, May 2011

"African Grace is a celebration of the supreme joy of music, life, and love, and the beauty of human voices, movement and collaboration. The energy of Soweto Gospel Choir is truly amazing. The whirlpool of talent leaves you gobsmacked" - Australian Stage, June 2011

"It was clear the choir were singing songs from the depths of their soul and the feeling behind them was electric.  Verdict – amazing" - Kenilworth Weekly News, UK 2011

"Presenting grace of form and grace of God in one program is a tall order but the choir pulled it off to perfection. The costumes were brilliant, the songs powerful, the sound heavenly, and the dancing exuberant. - Classical Voice, North Carolina, 2012

"Breathtaking to the eye and ear, Soweto had the audience having a good time: clapping Soweto rhythms and waving its arms in unison, reminiscent of rock concerts with American youth melding" - The Boston Musical Intelligencer, 2012

"Dazzling and unified.....Soweto Gospel Choir was as much to look at as to listen to. The human spirit – this you couldn't miss" - Los Angeles Times, 2012 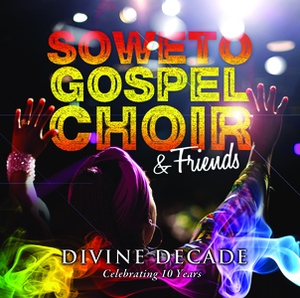 The Soweto Gospel Choir, one of the most recognised and superlatively talented choirs in the world is happy to release - Divine Decade. Part of the choir's ten year-anniversary celebration, collaborators include - The Soil, Joepraize, Zahara, Elvis Blue, Yvonne Chaka Chaka, Ladysmith Black Mambazo, Solly Mahlangu, Corlea Botha, Robert Plant, Eric Wainaina, Johnny Clegg, Paul Ruske, HHP and U2. The collaboration of all these talented artists resulted in a multi-faceted diverse exploration of sound and feeling.