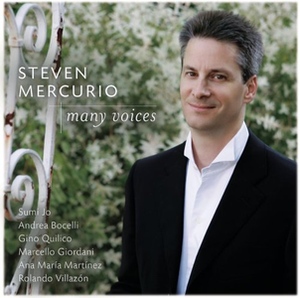 Six of the world's greatest singers – tenors Andrea Bocelli, Rolando Villazon and Marcello Giordani, sopranos Ana Maria Martinez and Sumi Jo and baritone Gino Quilico – lend their dazzling voices to the songs of their friend and colleague, composer and conductor Steven Mercurio, on Sony Classical's Many Voices, a debut recording devoted to Mercurio's own music.  With their soaring romantic melodies and richly textured orchestral settings, the seven passionate songs Mercurio introduces on Many Voices transcend the boundaries that separate classical and popular song.  Many Voices will be in stores worldwide on Tuesday, August 29, 2006.

Like Leonard Bernstein, who wrote three symphonies as well as West Side Story, Steven Mercurio inhabits both the classical and pop worlds – a thoughtful and sophisticated American composer, with a gift for writing unforgettable melodies, who has a parallel career as an acclaimed conductor of opera and orchestral music.  Tens of millions of record buyers and concertgoers all over the world know Mercurio as the conductor who has collaborated with Andrea Bocelli in concerts and recordings, as well as the conductor of The Three Tenors Christmas, a gala "Christmas in Vienna" concert broadcast worldwide and recorded by Sony Classical.

"I met Steven many years ago during La Boh?me," Andrea Bocelli recalls.  "From that time on, we have worked together very often.  I am very happy when I can work with him because, first of all, he's a great musician.  Second, he likes his job, and when he does music, he's always so happy.  And he can transmit this happiness to the singers.  We've done many things together – La Boh?me, Tosca, L'Amico Fritz, many things ... as for recordings, I hope to do many more things with him."

On Many Voices, Mercurio the composer effortlessly blends the expressive range, depth and subtlety of classical orchestral song with the immediate appeal of pop ballads.  His influences are diverse.  But his music – modern yet steeped in a heightened Romantic style – bears an unmistakable Italian accent, with the irresistible intensity of beloved Italian canzone and a magical melodic sweep that is in the tradition of such masters as Puccini and Respighi.

"People have become so specialized that the idea of being able to compose and conduct has come to be seen as a negative rather than a positive," Mercurio says. "I make my living as as a conductor, so in this specialized climate I compose only in my private time, without selling out either to the critics or to what the academic community would think about it.  These works were purely a labor of love, which is why I'm thrilled to be able to bring them out into the light."

With the exception of "Desiderio" and "Paternit?," which are sung in Italian, all the songs are performed in English.  The Serenade for Tenor and Orchestra was conceived as an orchestral work, but the other six songs on Many Voices were originally composed for voice and piano.  Mercurio orchestrated them especially for this recording, on which he conducts the Prague Philharmonia.

Andrea Bocelli sings "Desiderio" (Desire), a song for which he wrote the text, shortly after Mercurio conducted his record-breaking world tour in 1998.

"At a certain moment, we thought to record a project together that came from our minds," Bocelli says of his collaboration with Mercurio.  "I wrote the lyrics, and he has written the music. The song is called 'Desiderio,' and it has been a very nice experience."

The poem on which "Paternit?" (Fatherhood) is based is also by Bocelli, though it is sung here by another great Italian tenor, Marcello Giordani, one of the most admired tenors on the Metropolitan Opera's roster.  Bocelli was moved to write "Paternit?" after he held his infant son for the first time.

A sensational new star in the world of opera, the Mexican tenor Rolando Villazon sings the most expansive piece on Many Voices – Mercurio's Serenade for Tenor and Orchestra, a wistful meditation on a lost love, with a text created by William Hoffman (The Ghosts of Versailles), adapted from a poem by Paul Mackley.  When it was first performed, the Chicago Sun-Times called the Serenade "ravishing."  The Pulitzer Prize-winning American composer David Del Tredici, to whom the Serenade is dedicated, has said, "Steven Mercurio lives and breathes music with a naturalness and intensity that remind me of the young Leonard Bernstein."

Korean soprano Sumi Jo sings "A White Rose," based on a beloved poem by John Boyle O'Reilly, as well as the lullaby "Good Night" (based on a dark but soothing poem by Jane Taylor) and Grammy Award winning soprano, Ana Mar?a Mart?nez' whose dramatic range distinguishes her as one of today's most sophisticated lyric sopranos (currently on tour with Andrea Bocelli) delivers a touching "Song in Chaos," which is a setting of a letter from the playwright Eugene O'Neill to his wife Carlotta. The Canadian baritone Gino Quilico sings "Daydream," a nostalgic reverie for which Mercurio himself provided the text.
Born in New York, Steven Mercurio harbored parallel passions as a child, for rock & roll as well as Broadway musicals.  He taught himself the basics of composition and orchestration, and then polished these skills through advanced study at Boston University and the Juilliard School, where he earned his master's degree and would later teach.  Mercurio has won numerous awards and held multiple prestigious positions, including Music Director of the Spoleto Festival and Principal Conductor of the Opera Company of Philadelphia.

For Andrea Bocelli's current world tour, Mercurio opens the second half of the program with his original overture, entitled Mercurial Overture, written for the Nobel Peace Price Concert in Oslo honoring Doctors Without Borders.  He has also created five new arrangements for the tenor, including the dramatic "Tango Sentimental y Apasionado," based on a Piazzolla tango and the famous Carlos Gardel song "Por una cabeza" (heard in the film Scent of a Woman).