An immensely accomplished artist with a huge sound and a way of playing that is lyrical and intense without a hint of preciousness. -The Sunday Times-

It takes a player of Sung-Won Yang's Technical Brilliance and expressive boldness to make one feel The Kodaly's Solo Sonata's full grandeur. -Gramophone-

Cellist Sung-Won Yang has performed throughout the world as a soloist and chamber musician. He has given solo and chamber music concerts in prestigious venues as Alice Tully Hall at Lincoln Center in New York, the Salle Pleyel and Théâtre des Champs Elysées in Paris, the Concertgebouw in Amsterdam, the Terrace Theater at the Kennedy Center in Washington DC, the Musikverein in Vienna, the Opera City Hall in Tokyo, Symphony Hall in Osaka and the National Center for the Performing Arts in Beijing.

His recitals have also led to other leading cities, such as London, Rome, Frankfurt, Madrid, Prague, Helsinki, Boston, Seattle, Tel Aviv, Shanghai, Sydney and many others.

While exclusive artist for EMI-Korea, his first album entirely devoted to Kodály, was "the editor's choice of the month" Gramophone Magazine (February 2003) and "critic's choice of the year" Gramophone Magazine in the UK (December 2003). He was also nominated for best solo album to Edison Awards in the Netherlands (2003). His other recordings for EMI, are works by Rachmaninoff and Chopin with the pianist Ick Choo Moon (2002), the complete J.S. Bach's suites for cello solo (2005), and the complete Beethoven Sonatas and Variations for piano and cello with pianist Pascal Devoyon (2007). These recordings have all received with great response and success from music lovers and critics alike. After his Schubert album with violinist Olivier Charlier and pianist Emmanuel Strosser, appeared under the Decca label in 2009, his recent recordings are Dvorák Cello Concerto with the Czech Philharmonic Orchestra(Cond; Znedek Macal) and Trio Dumky (2010); an album combining jazz, Latin music and la variété française with the ensemble Les Bons Becs ‘Musical get away' (2011); Beethoven's ‘Archduke' trio and Op. 70 No. 2, with trio Owon (2013); and the complete works by Brahms and Schumann for cello and piano with Enrico Pace (2014); two records for Decca / Universal by Trio Owon :  The complete recording of Beethoven trios (2015), and For The Future (Olivier Messiaen : Quatuor pour la fin du temps) (2016).

Sung-Won Yang has collaborated with great musicians such as Christoph Eschenbach, MyungWhun Chung, Peter Eötvös, Johannes Kalitzke, Laurent Petitgirard, DongSuk Kang, and Pascal Devoyon. His interpretations of the Cello Concerto by Saint-Saëns, the Brahms Double Concerto, and Variations on a Rococo Theme by Tchaikovsky with the Orchestre Symphonic Français were broadcast by French TV in France and throughout Europe on Eurovision, and are available in DVDs (Goldline Classics). In addition, France Music, NHK (Japan), and KBS (Korea) among other radios have broadcast many of his live concerts. A regular performer of contemporary music, Sung-Won Yang premiered in Asia Peter Eötvös' concerto grosso with Seoul Philharmonic, with the composer conducting, and in Austria with the RFO, Austrian Radio Symphoniker. He also regularly commissions new works to young composers, such as two trios for piano, violin, cello, to very talented Korean composer MinJae Jeon (2014 and 2016) and other works such as with daegum (Korean flute Traditional wood) to Korean-American composer Jee Young Kim (2006) as well as a trio for piano, violin and cello to French composer Pierre Charvet (2006). These works have been world premiered by Sung-Won Yang in Paris, Saint-Nazaire and Seoul.

In 2009 Sung-Won Yang creates the Trio Owon with violinist Olivier Charlier et pianist Emmanuel Strosser, from the merger of three musicians from the Paris Conservatory, united by the same passion for chamber music. Their goal is to share with its audience a fully integrated vision of music, committed by a group without boundaries, resulting from a rich and varied artistic inspiration. Through concerts and recordings in England, France, and Korea, Trio Owon already stated its identity made of passion and maturity, like the painter whose name they bear.  Painter of Nature, emotion and poetry, OHWON Jang Seung Up, embodies for the trio Owon the universal dimension of Art. Contemporary of Brahms, but from a completely different aesthetic world, it symbolizes the quest of an ideal result of tradition and renewal in the nineteenth century Korea. His story brought to the cinema (Strokes of Fire, prized at Festival de Cannes in 2002), reveals the doubts and commitments of an undaunted artist. Beyond the anecdote (his name's sound summarizes some of our three first names…) here it symbolizes the osmosis between knowledge and modernity. 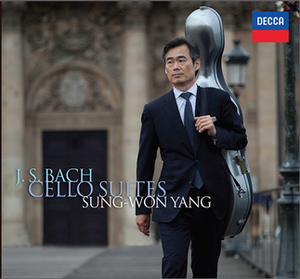 After the releasing the Bach album with EMI in 2005, Decca releases J.S. Bach, Six Cello Suites on the 25th August 2017. Recorded at 19th century's catholic church, Notre Dame de Bon Secours, Paris, this is the most adored classic piece containing all the tracks from the J.S. Bach, Six Cello Suites. In order to contain the natural sounds of the recording from the catholic church, this album specifically minimized the post production including the mixing process. You can experience the maturity and depth of Sung-Won Yang's cello sound of time compared to the recording 13 years ago. Sung-Won Yang's have said that Bach's music provides beyond happiness, yet intellectual and spiritual pieces which makes J.S. Bach, Six Cello Suites holy grail for the cellists.