Pianist Susan Kagan was educated at the University of Chicago and Columbia University, where she received a B.S. cum laude in English literature. She later received a Master of Arts in Musicology from Hunter College, and earned a Ph.D in Music History at the Graduate Center of the City University of New York. Her dissertation was a life-and-works study of Archduke Rudolph of Austria, which was published in 1988 as Archduke Rudolph, Beethoven's Patron, Pupil, and Friend (Pendragon Press, Stuyvesant, NY). She is a contributor to The New Grove, and has regularly reviewed new CDs for Fanfare Magazine since its first issue in 1977.

In researching the Archduke's history in Vienna and Czechoslovakia (where Rudolph was Archbishop and Cardinal of Olmutz (now Olomouc), Kagan studied the Archduke's compositions, many of the manuscripts with annotations and corrections by Beethoven, who gave him lessons in composition over a period of two decades. Many of these works have been brought back to life in her recordings, and they reveal a composer of considerable talent whose passion for music was inspired and stimulated by the greatest composer of his time.

In 1989 Kagan and Josef Suk, the renowned Czech violinist, played the premiere performance of Archduke Rudolph's Violin Sonata in concert in Prague, and in 1992 they recorded the Sonata and a set of variations for Koch International Classics. A second Archduke Rudolph CD, of a Sonata and a Trio with clarinet, followed, performed by the Metropolitan Opera Orchestra's Principal Clarinet, Ricardo Morales, Kagan, and her husband Gerald, Assistant Principal Cellist of the Met.

In 1996 Kagan was invited to play as soloist with the Suk Chamber Orchestra of Prague, a 13 member string orchestra established in the 1970's in honor of the composer Josef Suk, son-in-law of Antonin Dvorak. She has continued to join the orchestra as soloist every June in their festival series
at Prague Castle.

A lifelong passion for Beethoven, intensified by her work with Archduke Rudolph's music, brought Kagan into contact with the newly established American Beethoven Society at San Jose State University in 1985, of which she became a member of the Advisory Board. In 1995 she established a New York Chapter of the ABS at Hunter College, which has presented numerous Beethoven events, including several symposiums and recitals by such noted artists as Claude Frank, Jacob Lateiner, Seymour Lipkin, Charles Rosen, and Josef Suk.

With the Suk Chamber Orchestra, she recorded two sets of Mozart piano concertos, which included all of Mozart's early concertos scored for an orchestral ensemble of strings, two oboes, and two horns. The first set, containing the concertos No.11 in F (K.411), No.12 in A (K.412) and No. 14 in E-flat (K.449), was issued on Vox Classics in 1995. The second set, containing concerto No. 8 in C (K.246), No.9 in E-Flat (K.271), and the Rondo in A (K.386) were released on Koch Discover International. All of these concertos were performed without conductor. Two other CDs featuring the partnership of Josef Suk and Susan Kagan were released by Koch International: the complete violin and piano sonatas of Edvard Grieg (1997) and the Mendelssohn Sonata in F, coupled with works by
Woldemar Bargiel, in 2000.

Most recently, Kagan recorded her first CD of solo piano music - a program that illustrates Beethoven's connection with his two important pupils, Archduke Rudolph and Ferdinand Ries. Recently released on Koch International Classics, the CD contains Beethoven's Eleven Bagatelles, Op.119, and two rare piano compositions by the Archduke and Ries: the Archduke's Forty Variations on a Theme by Beethoven (1819), and Ries's fantasy,
The Dream (1813). 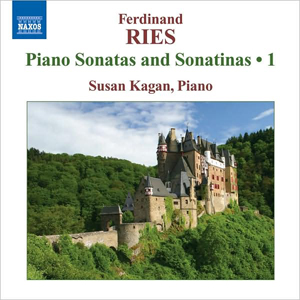 Ferdinand Ries is known mainly through his connection with Beethoven, as his family friend, piano student, and early biographer. Ries's connections with Beethoven began in Bonn and continued in Vienna, and later in London. Born in 1784, when Beethoven was fourteen, Ferdinand was the son of Franz Ries, violinist in the Electoral Court orchestra, who taught Beethoven the violin and befriended his family during Beethoven's youth. Largely self-taught, Ferdinand first studied in Munich, but around 1803 he went to Vienna to study the piano with Beethoven, who sent him to the noted theorist-composer Johann Albrechtsberger for composition lessons. Ries was probably Beethoven's closest friend during this period, carrying out all kinds of musical and secretarial tasks for him, copying parts, making transcriptions and arrangements, proof-reading and seeing to publications. Later, after years of touring as a concert pianist and a short stay in Paris, Ries settled in London and married an Englishwoman. Even then he continued to act on Beethoven's behalf.