Young, beautiful, handsome, likeable, dazzlingly talented and passionate
about the music........The 5 Browns an American quintet of brothers and sisters who are all virtuoso concert pianists

"This quintet of piano prodigies revamps stuffy classics for the
Rachmaninoff-impaired."
Entertainment Weekly

"One family, five pianos and 50 fingers add up to the biggest classical music sensation in years," New York Post

With one of the most appealing stories in music, The 5 Browns Deondra, 24 Melody, 20 Desirae 25, Ryan, 19 and Gregory, 22 - classical music's first family of piano virtuosos begin the '07-08 season with their third CD released October 2: Browns In Blue. Their latest effort features atmospheric classical and jazz-inspired piano music, performed with the sublime virtuosity that propelled these twenty-something year old siblings -- to the top of the nation's classical music charts first in 2005 with The 5 Browns (which spent 8 weeks at #1 on the Billboard Classical chart) and the next year with No Boundaries also #1 on the charts
for 21 weeks.

With Browns In Blue, The 5 Browns extend their individual and collective mastery of the piano and their command of classical repertoire through a series of emotionally complex works by Rachmaninoff, Brahms, Chopin, Debussy, and Saint Saens (featuring violin virtuoso Gil Shaham) to the jazz-influenced contemporary masterpieces of Gershwin (with special guest performance by trumpeter Chris Botti), W.C. Handy and Piazzolla. The 5 Browns round out Browns In Blue with a newly-commissioned five-piano piece
by John Novacek.

Whether performing individually or together in various combinations from duo to complex five-piano arrangements, The 5 Browns reveal a deep connection to the intent of their material while bringing a fresh energy and dynamic character to the color and tonal spectrum of their sound.

The 5 Browns -- Ryan, Melody, Gregory, Deondra and Desirae -- are the sons and daughters of Keith and Lisa Brown from Utah who wanted their Mormon children to have music in their lives. The goal was to raise "five good people." Not only did they achieve their goal, but they also managed to raise five great pianists. Each child at around age 3 showed a clear talent and interest in piano lessons, and while the children were introduced to other instruments, their passion was the piano. Playing came as naturally to them as eating or sleeping and as early as age 9 they had each made their debut with a major symphony orchestra-a major pay-off for the hours of practice and dedication the entire family had devoted.

When Desirae began to plan for college Deondra, a year younger, decided to accelerate her education in order to attend with her sister the family began looking into music schools and scholarships before deciding upon New York's Juilliard School. One year later when Gregory, Melody and Ryan were accepted to Juilliard, they became the first family of five siblings ever accepted simultaneously and so the entire Brown family, along with their five pianos, moved from Utah to New York.

The quintet enjoyed their first wave of critical attention in February 2002 when People magazine dubbed them the "Fab Five" and at about the same time they were featured on Oprah and 60 Minutes. The siblings caught the eye of multi-platinum recording producer Joel Diamond, who landed them an international recording contract with SONY BMG Masterworks and became their personal manager. Their success grew with the 2005 release of their debut album on RCA Red Seal. Simply titled The 5 Browns, the New York Post proclaimed: "One family, five pianos and 50 fingers add up to the biggest classical music sensation in years...When these kids do Rachmaninoff, they'll make you forget about Marshall amps." By the end of 2005, The 5 Browns were one of the top classical artists of the year.

In the music world they are an unprecedented concert attraction: a singular quintet of world-class concert pianists, performing on five pianos and various ensemble combinations, dedicated to bringing classical music to the lives of people everywhere. And they present the music true to themselves by focusing not only on the content, but through their presentation. To that end you won't see The 5 Browns in tux, tails or formal gowns. Instead they take advantage of their two act concert to not only show their more "dressed up" side, but also their casual and "cool" side, as they can feel just as comfortable playing in concert
dress or in jeans.

The quintet has garnered extensive coverage from media outlets ranging from The Tonight Show with Jay Leno, The View and The Martha Stewart Show to Public Radio's Performance Today, as well as The New York Times, Parade, the Los Angeles Times, the Sunday London Telegraph and Entertainment Weekly who called them "... five young Mormons who all play scorching piano. Thundering down on five Steinways together, they're button-down cute and somewhat otherworldly." Following an appearance with the Dallas Symphony, The Dallas Morning News said: "Send them out to schools from shore to shore, with piano teachers on hand to sign up students afterward and the future of classical music will look a lot brighter...The 5 Browns proved that classical music can reach teens and twenty-somethings on their own ground, but without posturing or
cheapening the product."

All through the quintet's career, The 5 Browns have been astounded by audiences' enthusiastic responses to their performances in a variety of venues far away from the revered walls of Carnegie Hall or Lincoln Center. Playing in schools and civic auditoriums, where the tickets are affordable and families can attend together (often three generations at once), their concerts have sold out and to everyone's delight the Browns have tapped a new audience. The Browns had younger members of their audiences dancing in the aisles on a recent tour while the roar of 2,500 screaming grade school and high school kids in a packed concert hall in Arizona nearly swept the group off the stage. And it happened again amid the deafening cheers of 4,000 in the college basketball arena of a small Idaho town, so packed that even the seats with no view were taken. The Browns have discovered that nearly a third of their audience has seldom, if ever, attended a concert of classical music, while another third is college-age or younger. With young fans waiting patiently for as long as an hour after performances to get The 5 Browns' autographs, greeting the fans in the lobby after each of concert is especially important and rewarding to the quintet.

Audiences in the UK, France and Germany, as well as Japan and Korea have also been dazzled by the 5 Browns who present themselves just as they really are: young adults with a modern look who love fashion, sports, computer games, dancing and all types of music most of all, classical. And audiences, especially the kids, are enthralled when the five perform in concert. When The 5 Browns sit down to perform on their five Steinway grand pianos ... their eyes lock ... a silent signal passes between them. And in an instant they are transformed, from "regular kids" to musical dynamos. Flawless in precision and steeped in passion, they invariably stun critics and shatter the preconceptions
of those who think classical music
inscrutable or intimidating.

"How could a classical musician ever imagine walking out on a stage with a sea of university students roaring as if we were the latest band!" Melody Brown has said. "Never before could I have thought that I'd be performing works by Debussy or Rachmaninoff for so many people my age and find that they actually really enjoyed what they heard! It just shows you that classical music is not only meant for those who have grown up around it. It can be placed in a concert hall, stadium, or living room, and it has the same effect this music can transcend everything!"

The 5 Browns are exclusive
Steinway Artists 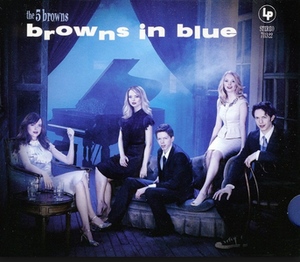 The 5 Browns -- Ryan, Melody, Gregory, Deondra and Desirae -- are back with Browns In Blue, an all-new album of romantic and jazz-inspired piano music drawn from a wide variety of sources. Performed with the sublime virtuosity that propelled these brothers and sisters to the top of the nation's classical music charts with two previous albums: The 5 Browns (8 weeks at #1 on the 2005 Billboard Classical Chart and No Boundaries (21 weeks at #1-2006). Browns In Blue is one of the year's most eagerly-awaited classical releases.