Get ready to hear The Tenors like you've never heard them before.

On their new album, Under One Sky, the multi-platinum JUNO-Award winning band co-wrote eight tunes, showing facets of themselves they've longed to share with their millions of fans.

"We've had eight years together and we wanted to turn those memories into music," said Clifton Murray, who is joined in The Tenors by Victor Micallef, Remigio Pereira and Fraser Walters.

The Canadian group has written a handful of songs for their previous three sets, butUnder One Sky marks the first time their songwriting talents stand toe-to-toe with their vocal prowess. In the process, they've created a rich collection that expands on their earlier efforts, while delving deeper into their collective strength as artists.

"That this band has been seen as just four singers is a bit of a misconception," said Pereira. "When you peel away the onion, you get many layers. With each album, we built more confidence to write for ourselves."

"Tenor groups aren't known for going out and writing like a band," said Micallef. "We came to the table as singers, but we're also songwriters and musicians and we're using all our talents, not just our voices, onstage. We get to show all our colours."

That's not to say they are abandoning the blueprint that made them beloved. Under One Sky's material covers the full range of tunes that have made The Tenors one of the most popular live draws across the globe. In addition to the originals, Under One Sky includes the foursome's reinventions of contemporary classics like "Lean on Me" and "You Are So Beautiful," a swoon-worthy duet featuring Walters' wife, Kelly Levesque, as well as their glorious interpretations of classical pieces "Granada," "Besame Mucho" and "Agnus Dei."

Over the years, The Tenors' musical diversity has become one of their primary strengths. "There used to be hesitation because we didn't want to confuse our audience by introducing too many different genres into one show or CD, but we've learned that this was one of our greatest strengths, which, in fact, the audience craves," said Micallef. "We're not targeting any one audience; we're just playing from our heart."

Walters began writing the title track, credited to all four Tenors, as a theme for the Pan Am Games, reflecting on Walters' experience on Canada's national track and field team 15 years ago. But the reflective upbeat tune morphed into something more universal. "It's a song with a big message," said Walters. "The goal for anyone who hears it is to realize that in our world, we have a choice to focus on our differences or on our similarities. It's an anthemic song about bringing people together."

He also sees the song as emblematic of The Tenors themselves and the way they have brought their different styles together into one harmonious blend. "Cliff and I are more pop singers, Vic and Remi are more classical," said Walters. "We meet in the middle."

The album's emotional centerpiece is "My Father's Son", a song written by The Tenors with Asher Lenz as a tribute to their own dads. "We just finished our PBS special and during that song, we all had moments where we broke down," said Micallef. "It was emotionally challenging to sing while watching images of our fathers on screen, for those of us who have lost them. It was even more difficult to look into the eyes of my son just after the fact. It's a powerful tune."

That poignancy and ability to express such feelings through their euphonious voices is what deeply connects The Tenors to their fans. "Our songs are inspirational. They're about goodness and helping others and about love," said Pereira. "A lot of people who listen to us have come through a lot of strife and they find wisdom and hope in our music."

Since their formation in 2007, The Tenors have performed more than 500 concerts on five continents and made over 150 television appearances, including on The Oprah Winfrey Show (with Céline Dion), at the 2014 National Christmas Tree Lighting at the White House, at the 2014 Stanley Cup Finals, the 2012 Emmy Awards, Her Majesty The Queen's 2012 Diamond Jubilee at Windsor Castle in England, and the 2010 Vancouver Olympic opening ceremonies. They have shared the stage with such artists as Andrea Bocelli, Sting, Elton John, Paul McCartney, Jennifer Hudson, Ellie Goulding, Justin Bieber, Earth, Wind & Fire and more.

"For every producer, it really came down to looking at their track record, their sounds, their strengths and fitting them with the right songs," said Murray.

Regardless of the producer, The Tenors exposed their vulnerability through their music, giving it their all in the studio. "The songs have everyone's blood, sweat and tears on them," said Pereira. "This is what we want to show people. It's very humbling. It's like walking out of your house naked. You're opening yourself up and you're bearing yourself."

Following the album's May 4 release, in June PBS stations across the U.S. will begin airing the quartet's third special, Under One Sky. The special gives a taste of what to expect when The Tenors hit the road. "In the past, the PBS sets didn't have anything to do with the tour," said Micallef. "This time, the ideas are the same, the stage design is similar."

The Tenors will kick off a 70-city North American tour in September, including stadium shows in Canada, and can't wait to perform their new material. "We were thinking about the live show with this album," said Walters. "When you come to the live show you get so many pockets of different styles, and we love to show our humor by interacting with our audience. That's why people seem to gravitate towards us. You'll hear us go from something more pop to something that's in Italian or Spanish with a big sound."

As they continue to evolve, The Tenors have a firm grasp on moving forward, while never forgetting what unites them with their audience. "Our goal is longevity-to be doing this in 15 to 20 years time," said Murray. "The only way to do this is to create memorable music that people cherish."

With Under One Sky, The Tenors have once again done just that, bringing all their musical worlds together for all to enjoy. 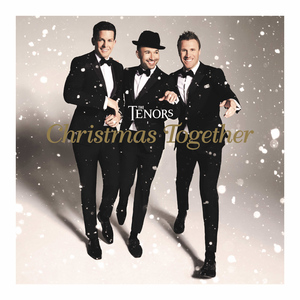 The Tenors, the multi-platinum vocal trio who have been thrilling audiences worldwide with their contemporary pop repertoire are releasing a holiday recording, CHRISTMAS TOGETHER on October 13th on DeccaRecords/Verve Label Group.  The Tenors, who inspire fans internationally with their original music and modern take on classic songs, will be embarking on a North American holiday concert tour that kicks off in Los Angeles, CA on November 18 and includes performances in New York, San Francisco and Toronto. The album features two original holiday songs, "When We Are Together" and "Santa's Wish" as well as seasonal standards including "Have Yourself A Merry Little Christmas," "I'll Be Home For Christmas," "Little Drummer Boy," "Oh, Come All Ye Faithful," and a soulful a cappella rendition of "God Rest Ye Merry Gentlemen."

Crossover Media Projects with: The Tenors

How Great Thou Art