Third Coast Percussion is a Grammy-winning, artist-run quartet of classically-trained percussionists hailing from the great city of Chicago. For over ten years, the ensemble has forged a unique path in the musical landscape with virtuosic, energetic performances that celebrate the extraordinary depth and breadth of musical possibilities in the world of percussion. The ensemble has been praised for "commandingly elegant" (New York Times) performances, the "rare power" (Washington Post) of their recordings, and "an inspirational sense of fun and curiosity" (Minnesota Star-Tribune). The four members of Third Coast are also accomplished teachers, and from 2013-2018 served as ensemble-in-residence at the University of Notre Dame's DeBartolo Performing Arts Center.

A direct connection with the audience is at the core of all of Third Coast Percussion's work, whether the musicians are speaking from the stage about a new piece of music, inviting the audience to play along in a concert or educational performance, or inviting their fans around the world to create new music using one of their free mobile apps.

Third Coast Percussion maintains a busy touring schedule, with past performances in 33 of the 50 states plus Canada, Germany, Italy, the Netherlands, and Poland, and venues ranging from concert halls at the Metropolitan Museum of Art and De Doelen to clubs and alternative performance spaces such as New York's Le Poisson Rouge and the National Gallery's West Garden Court.

The quartet's curiosity and eclectic taste have led to a series of unlikely collaborations that have produced exciting new art. The ensemble has worked with engineers at the University of Notre Dame, architects at the Frank Lloyd Wright Foundation, dancers at Hubbard Street Dance Chicago, and musicians from traditions ranging from the mbira music of Zimbabwe's Shona people, to indie rockers, to some of the world's leading concert musicians.

A commission for a new work from composer Augusta Read Thomas in 2012 led to the realization that commissioning new musical works can be – and should be – as collaborative as any other artistic partnership. Through extensive workshopping and close contact with composers, Third Coast Percussion has commissioned and premiered new works from Philip Glass, Devonté Hynes, Donnacha Dennehy, Glenn Kotche, Lei Liang, Gavin Bryars, Christopher Cerrone, Marcos Balter, and today's leading up-and-coming composers through their Emerging Composers Partnership Program. These works have become part of the ensemble's core repertoire and seen hundreds of performances across North America and throughout Europe.

Third Coast Percussion's recordings include eight full-length albums, three EPs, and a number of appearances on other releases. The quartet has put its stamp on iconic percussion works by John Cage, Steve Reich, and Philippe Manoury, and Third Coast has also created first recordings of commissioned works by Philip Glass, Augusta Read Thomas, David T. Little, and Ted Hearne, in addition to recordings of the ensemble's own compositions. In 2017 the ensemble won the Grammy Award for Best Chamber Music/Small Ensemble performance for their recording of Steve Reich's works for percussion.

Third Coast Percussion has always maintained strong ties to the vibrant artistic community in their hometown of Chicago. They have collaborated with Chicago institutions such as Hubbard Street Dance Chicago, the Chicago Philharmonic, and the Adler Planetarium, performed at the grand opening of Maggie Daley Children's Park, conducted residencies at the University of Chicago, Northwestern University, and the Civic Orchestra of Chicago, created multi-year collaborative projects with Chicago-based composers Augusta Read Thomas, Glenn Kotche, and chamber ensemble Eighth Blackbird, and taught tens of thousands of students through partnerships with The People's Music School, Urban Gateways, the Chicago Park District, Rush Hour Concerts, and others.

A shape-shifting, multifaceted singer/songwriter, composer, actor, author, and producer, Houston, Texas-born and London, England-raised polymath Devonté Hynes has recorded under his own name and with the combustible chillwave outfit Test Icicles, as well as under the pseudonyms Blood Orange (atmospheric and cinematic electro-R&B) and Lightspeed Champion (rootsy, psych-tinged dream pop). Hynes has also written songs for artists as diverse as Florence + the Machine, Theophilus London, and Solange Knowles; served as a fashion consultant for Jay-Z's Rocawear; and collaborated with Nedelle Torrisi, Sky Ferreira, Foals, and Britney Spears. In 2013 Hynes provided the original score for director Gia Coppola's evocative coming-of-age film Palo Alto. 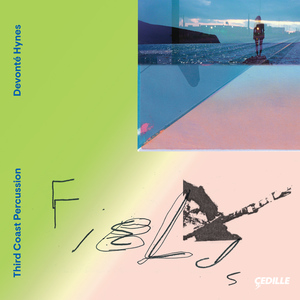 Orchestrated, arranged, and performed by Third Coast Percussion, the album's compositions include Hynes's multimovement For All Its Fury, which includes the title track "Fields," Perfectly Voiceless, and There Was Nothing  "Seeing what Third Coast Percussion has done with the pieces is magical," Hynes says Hynes is also credited as a performer on tracks that incorporate prerecorded synthesizer passages originally intended for Third Coast's reference in orchestrating the scores, all of which Hynes composed in a digital audio workstation (DAW).