Italy announces a formidable return to the opera stage with the young Italian tenor, Vittorio Grigolo. His triumphant debut this June at London's Royal Opera House Covent Garden, performing in a new production of Manon by Massenet alongside Anna Netrebko, caused a sensation amongst audience and music critics alike: "But the evening really belongs to her (Anna Netrebko's) Des Grieux, Italian tenor Vittorio Grigolo making the most sensational debut to be heard at Covent Garden for some time. He's got everything the role demands a voice that flows, terrific looks, an instinctive sense of theatre".
The Guardian

Born in Arezzo,Tuscany and raised in Rome, Vittorio was only four when he discovered his passion for music; a few years later he was made a soloist in the Sistine Chapel choir. Having made his debut as the Shepherd in Tosca at the age of thirteen, he began his vocal training in earnest, and at twenty-three became the youngest tenor ever to perform at La Scala, Milan. Within a few years, he was appearing at all the world's most prestigious opera houses, under the baton of Riccardo Chailly, Lorin Maazel, Zubin Mehta, Riccardo Muti, Myung-Whun Chung, Daniel Oren and Antonio Pappano, with a repertoire that includes Mozart, Donizetti, Verdi, Puccini, Gounod, Massenet, Offenbach, Bernstein and the sacred works of Rossini. As one of the leading tenors of his generation, he now performs worldwide, and is renowned for his star quality as both a singer and actor: Vittorio's exceptional dramatic and vocal talents have been widely praised by the world's press.

With a gold and platinum-selling solo album, a Grammy-nominated recording of Bernstein's West Side Story and his upcoming album "The Italian Tenor" released this Fall on Sony Classical, Vittorio is already established as a successful recording artist as well as a charismatic and accomplished stage performer. He brings the same energy to his live concert performances as he does to his operatic roles, and not long ago sang before an audience of over 40,000 at an event organized in Chicago in tribute to the late Luciano Pavarotti.

Most recently Vittorio has collaborated with Zubin Mehta and the Israel Philharmonic Orchestra in a special gala concert performance of Rigoletto in Tel Aviv. In September Vittorio will take the role of the Duke in Andrea Andermann's spectacular televised production of Rigoletto, with Placido Domingo, conducted by Zubin Mehta, which will be broadcast across two evenings by numerous European television stations. Vittorio will make his debut at the Metropolitan Opera in New York with La Boheme in October and next season will see him perform at La Scala, Milan in Romeo et Juliette. 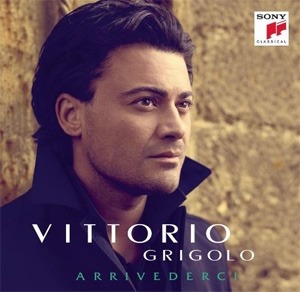 Hailed by the Independent as 'the most exciting young male talent in opera today,' Vittorio Grigolo follows up his Sony Classical debut album, The Italian Tenor, with his second release, Arrivederci - a fresh and personal take on Italy's exceptional musical heritage, available September 20. Also on November 6, Vittorio will also make his west coast operatic debut at the LA Opera, starring as Romeo in Shakespeare's classic, Romeo et Juliette.