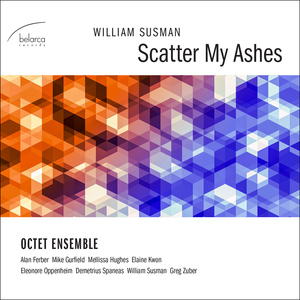 OCTET''s inaugural album has been recorded over the past few years with renowned engineer John Kilgore and was released by Naxos on the label Belarca. The album features the music of William Susman including two song cycles (with poems by his sister Sue Susman) Scatter My Ashes and Moving in to an Empty Space performed by soprano Mellissa Hughes, as well as his Piano Concerto and the ensemble work Camille.

OCTET takes the instrumentation of the American big band and scales it down to a brass section of saxophone, trumpet, and trombone and a rhythm section of piano, electric piano, double bass and drums plus vocals.

OCTET gathers together a stellar cast of artists who have worked with groups including eighth blackbird, SIGNAL, Alarm Will Sound, Victoire, and the Metropolitan Opera Orchestra. Their repertoire currently includes music by composer and founder William Susman such as the a live performance film score to Native New Yorker, Best Documentary Short at the Tribeca Film Festival.

William Susman's remarkable achievement is to take the familiar instrumentation of American popular music, harmonic and rhythmic influences from jazz and Afro-Cuban music and sinuous melodic lines that are uniquely his own and weave them into something new and fresh, yet timeless and haunting. Memorable yet enigmatic, simple yet profound, Susman's music is irresistible. - John Kilgore

Scatter my Ashes reached No. 1 on Amazon's Classical Hot New Releases, No. 8 on Billboard's Classical and was featured in iTunes Classical New and Noteworthy.

Scatter my Ashes was chosen as Album of the Week in December 2014 for the Seattle based 98.1 Classical KING FM radio show - Second Inversion

"This is one of the most fun albums to come my way in a while". "...this heavily minimalist-tinged music offers constant delight", "…impeccably crafted and played by all concerned with pinpoint accuracy" - Fanfare

"the next developments in the sphere (of) minimalism", "...state-of-the-art examples of this style world" - All Music

"…resplendent and melodious, and easy to embrace when its fresh blend of neo-classical, jazz, and popular song-based forms sparkles so effervescently…" "…ruminating on the self's dissolution and communing with nature…"…the experience of big city alienation and its citizens' insatiable appetite for sensory stimulation…" "…rambunctious syncopations…" "…both density and clarity…" - textura

"Hughes' dazzling vocals soar above each piece", "Hughes' voice amplifies the sorrow, hope, and drama of the poetry, making each word glow…" "…a beautiful and texturally fascinating sonic landscape which fully encompasses the listener in its sinuous melodies and jazz-infused rhythms", "…the album stands as a timeless combination of contemporary classical music, minimalism, and jazz into a profound and dynamic multidisciplinary work". - Second Inversion

"...a wonderful piano concerto..." "Here the composer goes not for the finger busting virtuosity that seems to be the current vogue but rather he evokes a latter day Mozart with more technically modest but highly entertaining music that communicates directly". - New Music Buff

"...everything flows in linear and circular motion as though a beautifully eccentric segmented ballet simultaneously restrained and exuberant, more than once ecstatic". "the entire concept of music top to bottom marvelously persists in non-stop hybridization and transmogrification". - Folk & Acoustic Music Exchange

"…the harmonious intertwining of jazz and Western classical, of straight rhythm with swing, of notes rich with sobriety overlaid by cheerfully rippling melodies. …This album, in addition to being delightfully listenable, serves as a short introductory course in new developments in serious music…" - The Voice

"…unusual tonal combinations and perking up listeners' ears through strongly jazz-inflected rhythms that tend to turn in unexpected directions." - INFODAD