"[Yannick Nézet-Séguin] really brought his best qualities as a musician and musical director to the fore. It can't be stated enough just how polished the Met Orchestra is under his baton. Every single note is in its place and the blending of the different colors is sublime … But what was most impressive was his ability to explore the musical form of the opera with nuance and elegance … the musical direction was as good as one could ask for." - Operawire, reviewing Dialogues des Carmélites, 9 May 2019

Yannick Nézet-Séguin became third Music Director of the Metropolitan Opera, New York in September 2018. His tenth, and last, season as Music Director of the Rotterdam Philharmonic was crowned by the orchestra's centenary celebrations in Rotterdam in June 2018, a summer tour of the leading European festivals and his appointment as Honorary Conductor. He remains Music Director of the Philadelphia Orchestra, a role he has held since 2012, and Artistic Director and Principal Conductor of the Orchestre Métropolitain (Montreal), where he has served since 2000. In September 2019, it was announced that he had accepted a lifetime contract with the Orchestre Métropolitain – a move that reflects the profound mutual trust between players, management and conductor.

Yannick studied piano, conducting, composition, and chamber music at the Conservatoire de musique du Québec in his native Montreal and choral conducting at the Westminster Choir College in Princeton, New Jersey before going on to study with renowned conductors, most notably the Italian maestro Carlo Maria Giulini. By the time he made his European debut in 2004 he had already founded his own professional orchestra and vocal ensemble, La Chapelle de Montréal, going on to conduct all the major ensembles in Canada.

In 2008 he was appointed Principal Guest Conductor of the London Philharmonic Orchestra, a post he held until 2014. He made his BBC Proms debut in 2009 with the Scottish Chamber Orchestra, returning in 2010 and 2013 with the Rotterdam Philharmonic. In 2013 he was announced as Artist-in-Residence at the Konzerthaus Dortmund for a three-year period.

His inaugural concerts as Music Director of the Philadelphia Orchestra received rave reviews and included his Carnegie Hall debut, conducting the Verdi Requiem. Alongside regular subscription and touring programmes, he leads three Carnegie Hall concerts each season. He has now extended his commitment to the orchestra until at least the 2025–26 season.

Nézet-Séguin is equally at home on the concert platform and in the opera pit. He made his debut at the Salzburg Festival in 2008 with a new production of Roméo et Juliette, returning to the city for the 2010 Mozartwoche, Don Giovanni at the 2010 and 2011 summer festivals, concerts with the Vienna Philharmonic in 2015, Haydn's Die Schöpfung with the Chamber Orchestra of Europe in 2016 and two appearances with the Symphonieorchester des Bayerischen Rundfunks at the 2019 summer festival. He made his debut at the Teatro alla Scala in 2011, has also conducted at the Royal Opera House, Covent Garden, the Vienna Staatsoper and Netherlands Opera, and has helped lead a highly successful Mozart cycle at the Baden-Baden Festspielhaus with the COE. Previously Chorus Master, Assistant Conductor and Music Adviser at Opéra de Montréal, during his time there he led productions of L'incoronazione di Poppea, Il barbiere di Siviglia, Così fan tutte, Pelléas et Mélisande, L'elisir d'amore, Wozzeck, Madama Butterfly, Salome and Elektra.

Following his Metropolitan Opera debut in 2009 with an acclaimed production of Carmen, he has returned each season, leading performances of Don Carlo, Faust, La traviata, Rusalka and Otello. The 2016-17 season saw him take the helm of a revival of Der fliegende Höllander, his first Wagner opera with the company. This was followed by Parsifal in February 2018 and by Richard Strauss's Elektra a month later. In his inaugural season as Music Director, Nézet-Séguin conducted La traviata (December 2018), Pelléas et Mélisande (January 2019) and Dialogues des Carmélites (May 2019), as well as conducting the Met Orchestra outside the opera house for the first time, in two concerts at Carnegie Hall (June 2019). In the 2019-20 season he conducted acclaimed performances of Turandot and Wozzeck.

Other highlights of last season include concert performances of Fidelio at the Opéra de Montréal with the Orchestre Métropolitain and wide-ranging programmes with the Philadelphia Orchestra both at home and on tour in Asia. As one of Carnegie Hall's 2019-20 Perspectives Artists, Nézet-Séguin conducted the Orchestre Métropolitain in its debut appearance at the legendary venue (during the orchestra's first US tour), and moved from podium to piano to accompany Joyce DiDonato in their interpretation of Winterreise. He also led concert performances of Die Frau ohne Schatten with the Rotterdam Philharmonic in Paris, Dortmund and Rotterdam.

Having begun the new season conducting innovative streamed performances with both the Orchestre Métropolitain (including a complete Beethoven symphony cycle for DG Stage) and the Philadelphia Orchestra, Nézet-Séguin has plans to work with artists including violinists Blake Pouliot and Lisa Batiashvili, and with the Chamber Orchestra of Europe as well as his own North American orchestras in the early months of 2021.

Yannick Nézet-Séguin signed an exclusive contract with Deutsche Grammophon in May 2018, continuing a long-term partnership that began in 2012 with the launch of a major new cycle of recordings of Mozart's mature operas recorded at Baden-Baden and all starring Rolando Villazón. Six recordings have been released to date: Don Giovanni; Così fan tutte; Die Entführung aus dem Serail; the Grammy-nominated Le nozze di Figaro; La clemenza di Tito and Die Zauberflöte ("Once again, Yannick Nézet-Séguin proves himself to be a consummate Mozartian" – Gramophone).

Nézet-Séguin's debut orchestral recordings with Deutsche Grammophon were released in September 2013. In the first he conducted the Philadelphia Orchestra in its first studio album release for a major label since a recording with DG in 1997. It featured Stravinsky's The Rite of Spring and Stokowski transcriptions of music by Bach and Stravinsky. The second recording, with the Rotterdam Philharmonic, offered Tchaikovsky's Pathétique Symphony and selected Romances from opp. 6 & 73, in which Nézet-Séguin accompanies Lisa Batiashvili at the piano. His recording of the complete Schumann symphonies with the Chamber Orchestra of Europe was released in 2014, while August 2015 saw the release of an album of Rachmaninov Variations with Daniil Trifonov and the Philadelphia Orchestra. Nézet-Séguin then joined forces again with the COE to record the complete Mendelssohn symphonies – a 3‑CD set released in June 2017. Duets, recorded with Rolando Villazón, Ildar Abdrazakov and the Orchestre Métropolitain de Montréal, was issued three months later.

Released in February 2018, Visions of Prokofiev showcases Lisa Batiashvili's performances of Prokofiev's violin concertos together with arrangements of three excerpts from his stage works. Nézet-Séguin is once more at the helm of the COE. After giving acclaimed live performances of the work, he and the Philadelphia Orchestra recorded Bernstein's Mass, which was added to the DG catalogue (its first appearance there) in March 2018. Released three months later, The Rotterdam Philharmonic Orchestra Collection is a 6CD set of previously unissued live recordings hand-picked by Nézet-Séguin.

Destination Rachmaninov – Departure, the first of two albums made with Daniil Trifonov and the Philadelphia Orchestra devoted to the complete Rachmaninov piano concertos, was released in October 2018. Featuring Concertos Nos.2 and 4, it won the Concerto award at the 2019 BBC Music Magazine Awards. Its much-anticipated companion piece, Destination Rachmaninov – Arrival, featuring Concertos Nos.1 and 3 together with Trifonov's transcription of Vocalise and The Silver Sleigh Bells, was released in October 2019 and has now been nominated for a Grammy Award.

Nézet-Séguin's next album featured a recording with the Philadelphia Orchestra of Mahler's Eighth Symphony, a monumental work performed at Verizon Hall in Philadelphia to mark the centenary of its US premiere. Their interpretation was captured by Deutsche Grammophon and released in January 2020.

Nézet-Séguin and the Philadelphia Orchestra have now embarked on a new Rachmaninov project for which they will record the composer's three symphonies and other orchestral works. The first of three albums pairs Symphony No.1 with the Symphonic Dances and will be released on 29 January 2021.

Yannick Nézet-Séguin's honours include Musical America's Artist of the Year (2016), ECHO KLASSIK's Conductor of the year (2014), a Royal Philharmonic Society Award; a National Arts Centre Award; the Virginia Parker Prize; the Prix Denise-Pelletier; and the Oskar Morawetz Award. He holds six honorary doctorates, from the University of Québec in Montreal (2011), Curtis Institute of Philadelphia (2014), Westminster Choir College of Rider University (2015), McGill University in Montreal (2017), Université de Montréal (2017); and Penn University (2018). He has been appointed a Companion of the Order of Canada (2012), Companion to the Order of Arts and Letters of Québec (2015), Officer of the Order of Québec (2015), Officer of the Order of Montreal (2017) and Honorary Fellow of the Royal Conservatory of Music (2020). 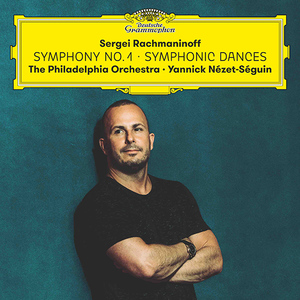 Sergei Rachmaninoff's symphonic works, among the most powerful and popular in the concert repertoire, hold a special place in the story of one of America's greatest musical ensembles. The Philadelphia Orchestra and its Music Director Yannick Nézet-Séguin are about to add a thrilling new chapter with the landmark launch of a cycle of Rachmaninoff's three symphonies and other orchestral scores for Deutsche Grammophon. The project follows naturally from their recordings of the Russian Romantic composer's piano concertos with Daniil Trifonov, the most recent of which – Destination Rachmaninov · Arrival – is in the running for a 2021 Grammy Award.

The first album, scheduled for international release in physical and digital formats on 29 January 2021, pairs the early Symphony No.1 with the Symphonic Dances, Rachmaninoff's last major composition, written for and dedicated to The Philadelphia Orchestra and its then conductor Eugene Ormandy and premiered by them 80 years ago this month. The second (Symphony No.2 and The Isle of the Dead) will be issued in early 2022, while the third and final recording (Symphony No.3 and The Bells) will appear as part of the commemorations of the composer's 150th birthday in April 2023.