His European debut in 2004 swiftly led to invitations to many ensembles, such as the Dresden Staatskapelle, Berliner Philharmoniker, Bavarian Radio Symphony Orchestra, Wiener Philharmoniker (in Salzburg, Lucerne and Vienna), Accademia Nazionale di Santa Cecilia, Royal Stockholm Philharmonic and Chamber Orchestra of Europe.  He made his BBC Proms debut in 2009 with the Scottish Chamber Orchestra, returning the following year with the Rotterdam Philharmonic.  Summer 2012 saw concerts with the Orchestre Métropolitain in Canada; The Philadelphia Orchestra in Vail and Saratoga; and concerts at Lincoln Center's Mostly Mozart Festival in New York with the Chamber Orchestra of Europe and Mostly Mozart Festival Orchestra.

A notable opera conductor, Mr Nézet-Séguin made his debut at the Salzburg Festival in 2008 with a new production of Roméo et Juliette, returning to the city for the 2010 Mozartwoche and for Don Giovanni at the 2010 and 2011 summer festivals.  For The Metropolitan Opera, he has conducted Carmen, Don Carlo and Faust, with La Traviata opening next month and will continue to appear each season thereafter.  His 2011 debut at Teatro alla Scala (Roméo et Juliette) was followed last year by his first production for Royal Opera House, Covent Garden (Rusalka) and returns in a later season.  For Netherlands Opera, he has conducted The Makropoulos Case, Turandot and Don Carlo (all with the Rotterdam Philharmonic) and in 2011, embarked on a major opera series for Festspielhaus Baden-Baden.

Last October, Mr Nézet-Séguin's inaugural concerts with The Philadelphia Orchestra were most warmly received and included his acclaimed Carnegie Hall debut (Verdi Requiem).  Alongside regular subscription and touring programmes, he will lead three Carnegie Hall concerts each season and will make their first recording together for Deutsche Grammophon later this season.  Other highlights of 2012/13 include two separate tours to Japan and the Far East with the Rotterdam Philharmonic; a German tour with the London Philharmonic; and the complete Schumann symphonies and concertos with the Chamber Orchestra of Europe, which he recorded live last November for Deutsche Grammophon from Cité de la Musique in Paris.

In July 2012, following highly successful DVD releases of Gounod's Roméo et Juliette (Salzburg Festival, 2008) and Bizet's Carmen (The Metropolitan Opera, 2010) for their Yellow Label, Deutsche Grammophon announced a major long-term collaboration.  Alongside his Philadelphia Orchestra and Chamber Orchestra of Europe recordings, he makes a series of three recordings with the Rotterdam Philharmonic, starting with Tchaikovsky's Sixth Symphony; and live recordings of Mozart's seven mature operas from the Baden-

The first, Don Giovanni, was recorded in 2011 with Mahler Chamber Orchestra and released last year to outstanding reviews and will be followed in 2013 by the release of Così fan tutte, recorded last summer with Chamber Orchestra of Europe. Remaining titles in the series are Idomeneo, Die Entführung aus dem Serail, Le nozze di Figaro, La clemenza di Tito and Die Zauberflöte. Mr Nézet-Séguin's discography with the Rotterdam Philharmonic also includes recordings of Strauss (Ein Heldenleben/Vier letzte Lieder) and Berlioz (Symphonie fantastique/La Mort de Cléopâtre) for BIS Records; and three EMI/Virgin releases, including an Edison Award-winning album of Ravel's orchestral works.  With the London Philharmonic Orchestra and Choir he has recorded Brahms's German Requiem on the LPO's own label; he also continues to enjoy a fruitful recording relationship with Orchestre Métropolitain and Canadian label ATMA Classique

Rotterdam Philharmonic Orchestra
A native of Montreal, Mr Nézet-Séguin studied piano, conducting, composition, and chamber music at the Conservatoire de musique du Québec in Montreal and choral conducting at the Westminster Choir College in Princeton, New Jersey before going on to study with renowned conductors, most notably the Italian maestro Carlo Maria Giulini.  His honours include a prestigious Royal Philharmonic Society Award; Canada's highly coveted National Arts Centre Award and the Prix Denise-Pelletier, the highest distinction for the arts in Quebec, awarded by the Quebec government.  In 2011, he received an honorary doctorate from the University of Quebec in Montreal and was appointed a Companion of the Order of Canada in 2012. 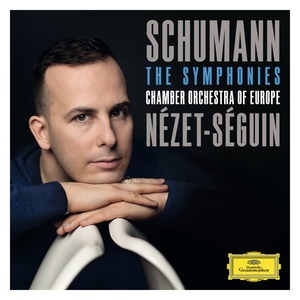 Canadian Maestro Yannick Nézet-Séguin is set to release Schumann: Symphonies Nos. 1-4, his first recording of a complete symphony cycle for Deutsche Grammophon. Captured live at acclaimed concerts in Paris, Nézet-Séguin conducts one of the world's preeminent chamber orchestras, the Chamber Orchestra of Europe. For this recording, Nézet-Séguin takes a new approach on familiar music while challenging the conventional view on Schumann's symphonies. "He's one of those composers whose personality is completely expressed in their music…those fluctuations between the melancholy and something very inward-looking are combined with a manic kind of energy that wants to conquer the world. That's what is so special about Schumann," states Nézet-Séguin.