Yo-Yo Ma's multi-faceted career is testament to his continual search for new ways to communicate with audiences, and to his personal desire for artistic growth and renewal. Whether performing new or familiar works from the cello repertoire, coming together with colleagues for chamber music or exploring cultures and musical forms outside the Western classical tradition, Mr. Ma strives to find connections that stimulate the imagination.

Yo-Yo Ma maintains a balance between his engagements as soloist with orchestras throughout the world and his recital and chamber music activities. He draws inspiration from a wide circle of collaborators, creating programs with such artists as Emanuel Ax, Daniel Barenboim, Christoph Eschenbach, Kayhan Kalhor, Ton Koopman, Yu Long, Bobby McFerrin, Edgar Meyer, Mark Morris, Riccardo Muti, Mark O'Connor, Cristina Pato, Kathryn Stott, Chris Thile, Michael Tilson Thomas, Wu Man, Wu Tong, Damian Woetzel, and David Zinman. Each of these collaborations is fueled by the artists' interactions, often extending the boundaries of a particular genre. One of Mr. Ma's goals is the exploration of music as a means of communication and as a vehicle for the migration of ideas across a range of cultures throughout the world. To that end, he has taken time to immerse himself in subjects as diverse as native Chinese music with its distinctive instruments and the music of the Kalahari bush people in Africa.

Expanding upon this interest, in 1998, Mr. Ma established Silkroad, a nonprofit organization thatseeks to create meaningful change at the intersections of the arts, education and business.  Under his artistic direction, Silkroad presents performances by the acclaimedSilk Road Ensemble and develops new music, cultural partnerships, education programs, and cross-disciplinary collaborations. Silkroad's ongoing affiliation with Harvard University has made it possible to develop programs such as the Arts and Passion-Driven Learning Institute for educators and teaching artists, held in collaboration with the Harvard Graduate School of Education, and a new Cultural Entrepreneurship initiative in partnership with Harvard Business School. More than 80 new musical and multimedia works have been commissioned for the Silk Road Ensemble from composers and arrangers around the world. Through his work with Silkroad, as throughout his career, Yo-Yo Ma seeks to expand the cello repertoire, frequently performing lesser known music of the 20th century and commissions of new concertos and recital pieces.  He has premiered works by a diverse group of composers, among them Stephen Albert, Elliott Carter, Chen Yi, Richard Danielpour, Osvaldo Golijov, John Harbison, Leon Kirchner, Peter Lieberson, Zhao Lin, Christopher Rouse, Giovanni Sollima, Bright Sheng, Tan Dun, John Williams and Dmitri Yanov-Yanovsky.

As the Chicago Symphony Orchestra's Judson and Joyce Green Creative Consultant, Mr. Ma is partnering with Maestro Riccardo Muti to provide collaborative musical leadership and guidance on innovative program development for The Negaunee Music Institute of the Chicago Symphony Orchestra, and for Chicago Symphony artistic initiatives.  Ma's work focuses on the transformative power music can have in individuals' lives, and on increasing the number and variety of opportunities audiences have to experience music in their communities.  Mr. Ma and the Institute have created the Citizen Musician Initiative a movement that calls on all musicians, music lovers, music teachers and institutions to use the art form to bridge gulfs between people and to create and inspire a sense of community.

Yo-Yo Ma is strongly committed to educational programs that not only bring young audiences into contact with music but also allow them to participate in its creation. While touring, he takes time whenever possible to conduct master classes as well as more informal programs for students – musicians and non-musicians alike. At the same time, he continues to develop new concert programs for family audiences, for instance helping to inaugurate the family series at Carnegie Hall. In each of these undertakings, he works to connect music to students' daily surroundings and activities with the goal of making music and creativity a vital part of children's lives from an early age. He has also reached young audiences through appearances on "Arthur," "Mister Rogers' Neighborhood" and "Sesame Street."

Mr. Ma's discography of over 90 albums (including 18 Grammy Award winners) reflects his wide-ranging interests. He has made several successful recordings that defy categorization, among them "Hush" with Bobby McFerrin, "Appalachia Waltz" and "Appalachian Journey" with Mark O'Connor and Edgar Meyer, and two Grammy-winning tributes to the music of Brazil, "Obrigado Brazil" and "Obrigado Brazil – Live in Concert." Mr. Ma's recent recordings include Mendelssohn Trios with Emanuel Ax and Itzhak Perlman;  "The Goat Rodeo Sessions," with Edgar Meyer, Chris Thile and Stuart Duncan, which received the 2013 Grammy for Best Folk Album; and"A Playlist Without Borders," recorded with the Silk Road Ensemble, which was released in September 2013.Across this full range of releases, Mr. Ma remains one of the best-selling recording artists in the classical field.  All of his recent albums have quickly entered the Billboard chart of classical best sellers, remaining in the Top 15 for extended periods, often with as many as four titles simultaneously on the list. In fall 2009, Sony Classical released a box set of over 90 albums to commemorate Mr. Ma's 30 years as a Sony recording artist.

Yo-Yo Ma was born in 1955 to Chinese parents living in Paris. He began to study the cello with his father at age four and soon came with his family to New York, where he spent most of his formative years. Later, his principal teacher was Leonard Rose at the Juilliard School. He sought out a traditional liberal arts education to expand upon his conservatory training, graduating from Harvard University in 1976. He has received numerous awards, including the Avery Fisher Prize (1978), the Glenn Gould Prize (1999), the National Medal of the Arts (2001), the Dan David Prize (2006), the Leonie Sonning Music Prize(2006), the World Economic Forum's Crystal Award (2008), the Presidential Medal of Freedom (2010), the Polar Music Prize (2012) and the Vilcek Prize in Contemporary Music (2013).  In 2011, Mr. Ma was recognized as a Kennedy Center Honoree.  Appointed a CultureConnect Ambassador by the United States Department of State in 2002, Mr. Ma has met with, trained and mentored thousands of students worldwide in countries including Lithuania, Korea, Lebanon, Azerbaijan and China.   Mr. Ma serves as a UN Messenger of Peace and as a member of the President's Committee on the Arts & the Humanities.  He has performed for eight American presidents, most recently at the invitation of President Obama on the occasion of the 56th Inaugural Ceremony.

Mr. Ma and his wife have two children. He plays two instruments, a 1733 Montagnana cello from Venice and the 1712 Davidoff Stradivarius.

Kathryn Stott is internationally recognised as one of Britain's most versatile and imaginative musicians and among today's most engaging pianists. She is in demand for a wide variety of chamber music alliances, playing with some of the world's leading instrumentalists, as well as appearing on major international concert platforms in recitals and concerto performances. Kathryn has also directed several distinctive concert series and festivals and has developed an extensive and exceptionally varied catalogue of recordings.

Born in Lancashire, she studied at the Yehudi Menuhin School and the Royal College of Music and was a prize-winner at the Leeds International Piano Competition 1978. Her teachers included Nadia Boulanger, Vlado Perlemuter and Kendall Taylor. In addition to her busy career as a performer, she is a visiting professor at the Royal Academy of Music in London and was recently made an Honorary Member.

Kathryn has been performing and recording with Yo-Yo Ma for nearly 30 years and together they regularly tour Europe, the USA, South America and the Far East. She has developed shared musical interests with an amazing array of performers and has always enjoyed collaborations with other musicians. With a vast repertoire, Kathryn has maintained a keen interest in contemporary music and has had many works written especially for her. In particular, her close musical relationship with the composer Graham Fitkin has led to 7 World premieres. She is a remarkable exponent of Tango and other Latin dance music, reflected in her collaboration with Yo-Yo Ma and leading South American musicians on the Grammy Award-winning Sony CD ‘Soul of the Tango' and its successor ‘Obrigado Brazil'. In the recording studio she has created a large and eclectic body of work including concertos and solo repertoire; of particular note is her recording for Hyperion of the complete solo works by Fauré and the complete Kabalevsky Concertos for Chandos. Apart from her CDs with Yo-Yo Ma, she has also recorded with Truls Mørk, Christian Poltéra, the Hermitage String Trio, Guy Johnston, the Doric string quartet, Noriko Ogawa and Tine Thing Helseth.

Kathryn Stott has been the artistic vision behind several major festivals and concert series. ‘Piano 2000' and ‘Piano 2003' ( Bridgewater Hall, Manchester) established her reputation as an astute programmer; and following the earlier ‘Fauré and the French Connection' she was appointed Chevalier dans l'Ordre des Arts et Lettres by the French Government. From 2009 - 2014 she is Artistic Director of the Manchester Chamber Concerts Society and was Guest Artistic Director of Incontri in Terra di Siena in 2010 and 2011. Kathryn curated a series of 6 concerts called ‘Dance!' for Leeds International Concerts in 2014.

A regular visitor to international festivals both as soloist and chamber musician, Kathryn has recently performed at the Kennedy Centre, Washington DC, Tonhalle, Zurich and made a welcome return to the BBC Proms performing with the BBC Concerto Orchestra. In 2014, she also toured the UK with cellist Giovanni Sollima and performed for the first time with JP Jofre and his Hard Tango Chamber Band in New York. 2015 began with a highly successful tour of New Zealand. In the Autumn, Kathryn will undertake an extensive solo tour of Australia before continuing her concert schedule in the Far East. 2015 also celebrates her 30 year partnership with Yo-Yo Ma.

In 2008 Kathryn celebrated her 50th birthday with 25 musician friends raising £30k for HIV research and Nordoff-Robbins Music Therapy. Besides her performing commitments, Kathryn has also been on the Board of the Hallé Orchestra, a position she held for 7 years. Kathy Stott has a daughter, Lucy, and lives in Manchester. A keen walker, she enjoys being out in the countryside and spending time with her working cocker spaniel, Archie.

Songs from the Arc of Life 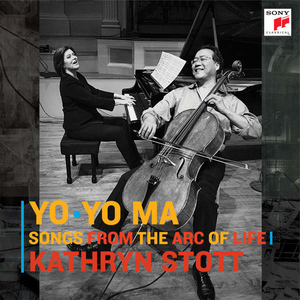 Cellist Yo-Yo Ma and pianist Kathryn Stott create a unique classical music experience with their new Sony Classical recording Songs from the Arc of Life available September 18, 2015. This all-new recording also celebrates thirty years of friendship and collaboration in concerts and recordings for Ma and Stott. The album includes pieces they have frequently performed but never recorded, as well as a handful of discoveries.

Songs from the Arc of Life