"...jaw-dropping awesome!"  - SAN FRANCISCO EXAMINER
"…energetically and electrifyingly out of this world" – BACHTRACK
"One of the most enthralling piano duets of today's millennial generation" - SAN FRANCISCO CLASSICAL VOICE
Since joining forces as a professional duo in 2009, internationally acclaimed solo pianists Eva-Maria Zimmermann and Keisuke Nakagoshi – ZOFO - have electrified audiences from Carnegie Hall to Tokyo Japan with their dazzling artistry and outside-the-box thematic programming for piano-four-hands.  This GRAMMY- nominated, prize-winning Steinway Artist Ensemble – one of only a handful of duos worldwide devoted exclusively to piano duets – is blazing a bold new path for piano-four-hands groups by focusing on 20th and 21st century repertoire and by commissioning new works from noted composers each year.
ZOFO, which is shorthand for 20-finger orchestra (ZO=20 and FO=finger orchestra), also performs heart-pumping duet arrangements of famous orchestral pieces such as Stravinsky's Rite of Spring, exploring the realms in which many composers first experienced their symphonic visions.
Since its inception in 2009, ZOFO has made some remarkable achievements:
TWO GRAMMY NOMINATIONS:  Best Chamber Music/Small Ensemble Performance and Producer of the Year, Classical for their first album MIND MELD, released 4/2012
FIRST PLACE:  2010 Bradshaw & Buono International Piano Competition
CARNEGIE HALL concert debut May 2010
FINALISTS: 2011 Osaka International Chamber Music Competition – only piano duo to be elevated to the final round
MULTI-DISC RECORDING CONTRACT with GRAMMY Award winning Sono Luminus Records
STEINWAY ARTIST ENSEMBLE  designation conferred by Steinway & Sons
11 SELF-COMMISSIONED WORKS  by noted composers including Pulitzer Prize winner William Bolcom, Gabriela Lena Frank and Terry Riley
NATIONAL AND INTERNATIONAL PERFORMANCES  at prestigious venues across the United States and in Europe and Japan.
They have been featured on American Public Media's Performance Today and in a live in-studio performance on WFMT Chicago's Impromptu Eva and Keisuke are sincerely grateful to the fans, family and arts granting organizations that have made it possible for them to commission and perform new duet works each year, including their first major commissions from acclaimed composers Gabriela Lena Frank and Allen Shawn.  During the 2014-15 concert season ZOFO premiered a new piece from distinguished composer William Bolcom, made possible by the generous support of the Chamber Music America Commissioning program.  Based in San Francisco, ZOFO is a fiscally sponsored Affiliate of the San Francisco Friends of Chamber Music.
Keisuke Nakagoshi began his piano studies at the age of ten, arriving in the United States from Japan at the age of 18. Mr. Nakagoshi earned his Bachelor's degree in Composition and Masters Degree in Chamber Music from the San Francisco Conservatory of Music. Graduating as the recipient of multiple top awards, Keisuke was selected to represent the SFCM for the Kennedy Center's Conservatory Project, a program featuring the most promising young musicians from major conservatories across the United States.
Mr. Nakagoshi has performed as soloist to acclaim on prestigious concert stages across the United States, including the Kennedy Center, Carnegie Hall, the Hollywood Bowl, and Davies Symphony Hall in San Francisco. He has received training from some of the most celebrated musicians of our time - Emanuel Ax, Gilbert Kalish, Menahem Pressler, Robert Mann, Paul Hersh and David Zinman. Mr. Nakagoshi is Pianist-in-Residence at The San Francisco Conservatory of Music.
Dynamic Swiss pianist Eva-Maria Zimmermann maintains a robust career in Europe and the United States, offering performances that are "breathtakingly intense" (Der Bund) and "passionate and deeply expressive" (Berner Oberlander). Her solo appearances involve recitals as well as concerto performances with major symphonies, including the Orchestre de la Suisse Romande.
Winner of the prestigious Rotary International Ambassadorial Scholarship, Ms. Zimmermann has appeared at international festivals worldwide, including the "Festival Piano en Saintonge" France, the "Sommerfestspiele Murten" Switzerland, and San Francisco's "Other Minds Festival of New Music." A graduate with highest honors from the Conservatory of Geneva, Eva-Maria has studied with many distinguished musicians - Leon Fleisher, György Sebök, Leonard Hokanson and Dominique Merlet, among others.
As an educator, Eva-Maria has been a faculty member of the University of San Francisco and currently teaches in the music program at the Nueva School in Hillsborough, CA, founded by Sir Yehudi Menuhin.
ZOFO 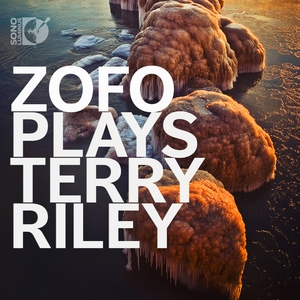 ZOFO is at it again, this time with an all Terry Riley album, which includes original compositions, arrangements and a special commission by the duet. It is quite evident in this music that the composer and the performers were personally engaged in the making of this electrifying project. From the very beginning, Terry Riley worked in collaboration with ZOFO in the making of this album. Mr. Riley himself said: "There is nothing quite like hearing the full 8 octaves of a piano sounding in all its orchestral richness." He certainly makes full use of the sounds of the piano in the pieces originally written for piano-four-hands, from The Heaven Ladder, Book 5, which include the varying "Cinco de Mayo," "Jaztine," "Waltz for Charismas," "Tango Doble Ladiado," and "Etude From the Old Country." Keisuke arranged "G Song" and "Half-Wolf Dances Mad in Moonlight," which were originally composed for the Kronos Quartet, and Eva arranged "Simone's Lullaby," originally for solo piano. The arrangements were both challenging and fun to create, but ZOFO managed to keep the transparency and flavor of Riley's originals while exemplifying the unique potential for four-hand piano. The "Praying Mantis Rag" was composed especially for ZOFO, and actively illustrates their vibrant character as a duet.