Yundi Li was born in Chongquing in central China. As with many musicians, his penchant for music became apparent in early childhood.  One day, when he was three years old, he was so fascinated by a man playing an accordion in a shopping mall that he refused to leave the mall.
At the age of four,  he started learning to play the accordion. When he was seven, he asked his parents to let him have piano lessons. At the age of twelve, Li gave the best performance in a fiercely competitive selection process and thus earned himself a place at the top music school in Sichuan province.
About a year later, when Li's teacher decided to take up a post at the School of Arts in Shenzhen, southern China, Li's family moved in order to allow the young prodigy to continue his studies in Shenzhen. The tuition at this school was expensive, and Li's mother had already given up her job in order to supervise the boy's education. However, Li had  won numerous scholarships and awards which enabled him to afford the fees.
At thirteen, Li won the Stravinsky Competition in the United States.  He went on to take First Prize at the Gina Bachauer International Piano Competition in the United States and Third Prize at the Franz Liszt Piano Competition in the Netherlands, as well as being a major winner in the Second China International Piano Competition in Beijing.
At just eighteen, Yundi Li won the first prize at the Frederic Chopin Competition held in Warsaw in October 2000.
He has recently announced that he will never compete again. He is currently on the roster of  Deutsche Grammophon (DG). His first recording for DG was an all-Chopin recital album, released in early 2002. Meanwhile, he continues his musical studies in Germany.
Yundi 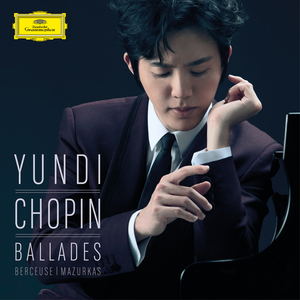 Yundi, the Chinese dazzling pianist acclaimed by the Wall Street Journal for his ‘poetic depth and patrician elegance,' continues his award-winning exploration of the works of Chopin with Chopin Ballades, released on Mercury Classics / Deutsche Grammophon/ Universal Music Classics. For his new all-Chopin recording, Yundi performs the Opus 17 set of four Mazurkas, the Berceuse (Op 57), and all four Ballades. The latter works were composed between 1831 and 1842, and contain some of the composer's most operatic writing, as well as his most challenging technical demands.