Gabriel Kahane is a songwriter, singer, pianist, composer, devoted amateur cook, guitarist, and occasional banjo player. This spring, he celebrates the release of his debut album for Sony Masterworks, The Ambassador, a collection of songs inspired by the architecture and popular culture of Los Angeles. His previous album, Where are the Arms, was released in 2011 to critical acclaim, praised by the New York Times for its "extravagant poise and emotional intelligence."

As a composer of concert works, Kahane has been commissioned by the Brooklyn Academy of Music, Carnegie Hall, the Los Angeles Philharmonic, American Composers Orchestra, Kronos Quartet, The Caramoor Festival, and Orpheus Chamber Orchestra, with whom Gabriel toured last spring performing Gabriel's Guide to the 48 States, an hour-long cycle on texts from the WPA American Guide Series. An avid chamber musician, he has appeared in recital with string quartet Brooklyn Rider at Carnegie Hall, at the Library of Congress with fellow composer/performer Timo Andres, and on tour throughout North America with cellist Alisa Weilerstein.

In a few years, Gabriel has accrued a diverse list of collaborators, having performed or recorded with artists ranging from Sufjan Stevens, Rufus Wainwright, Chris Thile, and Brad Mehldau to Jeremy Denk, Jonathan Biss, and composer/conductor John Adams.

Equally at home in the world of theater as on the concert stage, Kahane's musicalFebruary House received its world premiere production at New York's Public Theater in May 2012; an original cast album was recently released on StorySound Records.

Gabriel is a proud graduate of Brown University and a fellow of both the MacDowell Colony and Yaddo. He makes his home in the historic Ditmas Park district of Brooklyn, New York, where he can often be found braising unctuous cuts of meat or stumbling through transcriptions of Mahler Symphonies on his century-old piano. 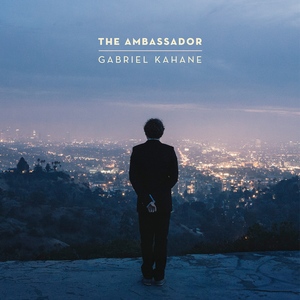 From Die Hard to the architecture of Richard Neutra and R.M. Schindler, from Blade Runner to the fiction of James M. Cain and Raymond Chandler, and from fires, riots, and earthquakes to the lives of so many Americans who have looked to Southern California as a panacea, Gabriel Kahane's The Ambassador (Masterworks)draws its inspiration from a multitude of sources to tell intimate, human stories against the backdrop of Los Angeles architecture and popular culture.