Widely acclaimed as a key figure in the music of our time and as a uniquely significant interpreter of piano repertoire from every age, Pierre-Laurent Aimard enjoys an internationally celebrated career.

He performs throughout the world each season with major orchestras under conductors including Christoph von Dohnányi Gustavo Dudamel, Peter Eötvös, Nikolaus Harnoncourt, Sir Simon Rattle and Esa-Pekka Salonen. He has been invited to create, direct and perform in a number of residencies, with recent projects including at Carnegie Hall, New York's Lincoln Center, Vienna's Konzerthaus, Berlin's Philharmonie, the Lucerne Festival, Mozarteum Salzburg, Edinburgh Festival, Cité de la Musique in Paris, the Tanglewood Festival and London's Southbank Centre, where he was Artistic Advisor to the 'Exquisite Labyrinth' festival celebrating the music of Pierre Boulez. Aimard is also the Artistic Director of the prestigious and historic Aldeburgh Festival. Commenting on his directorship, the Guardian wrote: "Aimard has ensured that the provincialism Britten himself dreaded has no place here…it reassures music-lovers in search of seriousness and quality."

Current and future highlights include solo recitals in London, New York, Chicago, Paris Tokyo, Vienna, Beijing and Amsterdam and concerto appearances with the Boston Symphony Orchestra, London Philharmonic and Deutsches Symphonie-Orchester Berlin. He also regularly directs concerts from the keyboard with the Chamber Orchestra of Europe. In Autumn 2014 he will join the Bavarian Radio Symphony Orchestra in Munich to give the world premiere of a Piano Concerto by Harrison Birtwistle, with further performances in Porto, London and Boston and in Spring 2015 he will undertake a recital tour with Tamara Stefanovich, playing all of Boulez's completed works for piano in celebration of the composer's 90th birthday.

Born in Lyon in 1957, Pierre-Laurent Aimard studied at the Paris Conservatoire with Yvonne Loriod and in London with Maria Curcio. Early career landmarks included winning first prize in the 1973 Messiaen Competition at the age of 16 and being appointed three years later, by Pierre Boulez, to become the Ensemble intercontemporain's first solo pianist.

Aimard has had close collaborations with many leading composers including Kurtag, Stockhausen, Elliott Carter, Pierre Boulez and George Benjamin and had a long association with György Ligeti, recording his complete works for piano. Most recently he performed the world premiere of Tristan Murail's Piano Concerto as well as Carter's last piece: Epigrams for piano, cello and violin, which was written for Pierre-Laurent and premiered at the Aldeburgh Festival in June 2013. Through professorships at the Hochschule Köln and Conservatoire de Paris, as well as numerous series of concert lectures and workshops worldwide, he sheds an inspiring and very personal light on music of all periods. During 2009 Aimard was invited to give a series of classes and seminars at the College de France, Paris. He was the recipient of the Royal Philharmonic Society's Instrumentalist Award in spring 2005 and was named "Instrumentalist of the Year" by Musical America in 2007.

Pierre-Laurent now records exclusively for Deutsche Grammophon. His first DG release, Bach's Art of Fugue, received both the Diapason d'Or and Choc du Monde de la Musique awards, debuted at No.1 on Billboard's classical chart and topped iTunes' classical album download chart. In recent years Pierre-Laurent has been honoured with ECHO Classik Awards, most recently in 2009 for his recording of solo piano pieces, 'Hommage à Messiaen' and was also presented with Germany's Schallplattenkritik Honorary Prize the same year. His recording of Ives' Concord Sonata and Songs received a Grammy award in 2005. His highly successful 2011 release, ‘The Liszt Project' featuring the music of Liszt alongside Berg, Bartok, Ravel, Scriabin and Messiaen, was followed by a recording of Debussy's Préludes in 2012, the composer's anniversary year. 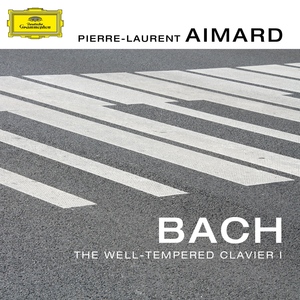 Pierre-Laurent Aimard is about to embark on a personal artistic journey. The French pianist will spend much of the next year in company with the music of Johann Sebastian Bach, digging deep beneath the surface of one of the composer's greatest works. Aimard's Bach odyssey will span four continents, reaching audiences in fifteen countries with thirty-four performances featuring the first book of The Well-tempered Clavier. This ambitious project stands as a major landmark in the development of an artist acclaimed worldwide for the imaginative eloquence and poetic insight of his music-making. Aimard's latest Deutsche Grammophon album, scheduled for release on August 19, 2014, presents his mature thoughts on The Well-tempered Clavier Book I, embracing everything from the sublime stillness of its opening Prelude in C major to the labyrinthine twists of the final Fugue in B minor.